Turkey's exports increase in June despite unrest in Iraq, Syria 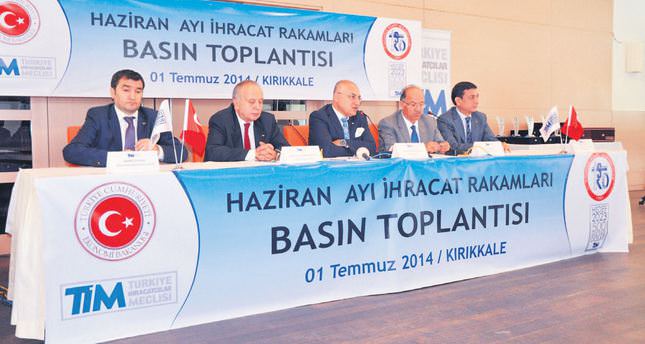 TİM's export report for June shows that Turkey's total imports increased by 6.6 percent despite ongoing unrest in Iraq, which is the second largest export market for Turkish companies and contractors

Turkish exports increased by 6.6 percent in June, reaching $12.54 billion despite a cut in growth rates across the world, according to data released by Mehmet Büyükekşi, the head of the Turkey Exporters Assembly.

Mehmet Büyükekşi, president of the Turkey Exporters Assembly (TİM), announced the figures of Turkey's total exports in June. According to data from the TİM, Turkey's exports increased by 6.6 percent in June reaching $12.54 billion (TL 26.68 billion).

Speaking in Kırıkkale, a province neighboring capital city Ankara, Büyükekşi commented on current economic and politic issues. "The U.S. growth forecast was decreased from 2.9 to 2.1-2.3 percent by the Fed. The Fed also decreased the monthly bond purchase volume from $45 billion to $35 billion," noted Büyükekşi. He also noted that TİM experts expect that total imports will increase in the near future with positive contributions from domestic demand and the monetary easing policy of the European Central Bank.

In the first quarter of 2014, Büyükekşi noted that Turkey grew 4.3 percent exceeding the entire international forecast. He added that "With this growth rate, Turkey ranked fourth in the emerging economies list. Turkey also ranked third in Europe after Czech Republic and Poland when the increase in the export rates were compared.

He also added "Imports of EU-23 countries decreased by 2 percent and 13 billion euros became narrowed in the first four months of 2014. In the same period, we increased our exports to EU countries by 14 percent. Exporting to a market where demand is shrinking creates a price pressure, which requires exchange rates to stay on a certain level." Büyükekşi, also commented on the latest developments in Iraq. "We are deeply sorry for the 80 Turkish citizens captured in Mosul.

Besides, Turkey's exports to Iraq have drastically declined after the gunfight started in the country. Now, Turkish companies can only reach the Iraqi market via a route passing through Kirkuk," Büyüekşi remarked.

Highlighting that Iraq used to rank as the second country that Turkey exports most to, churning out $12 billion annually, Büyükekşi said Turkey's exports to Iraq decreased by 21 percent in June. "Turkish exporters will recover their losses stemmed from unrest in the Middle East with increasing exports to other markets like lately-recovering European countries," he noted.