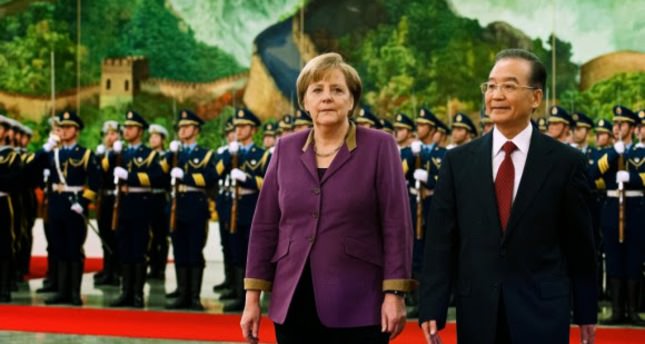 by Jul 06, 2014 12:00 am
German Chancellor Angela Merkel arrived in China on Sunday for her seventh visit since 2005, with economic ties topping the agenda and a high-powered business delegation in tow.

Merkel touched down early Sunday in the southwestern city of Chengdu, where she met local officials, visited a market and toured a factory operated by German car manufacturer Volkswagen.

She then travelled to Beijing, where she wrapped up the first day of the three-day visit with a meeting with Premier Li Keqiang and a banquet at the Diaoyutai State Guesthouse.

But during the latest visit, any discussion of human rights is likely to take place behind closed doors, an approach that German officials have argued can be more effective in China than finger-wagging reprimands.

In a commentary, Xinhua on Sunday hailed Merkel's trip. "It is fair to say that China-Germany relations are at their best in history, which have been strongly underpinned by the pragmatic cooperation between the two economic heavyweights," it said.

Among the companies represented in Merkel's delegation -- and eyeing deals that could further cement bilateral ties -- are Siemens, VW, Airbus,
Lufthansa and Deutsche Bank, according to German media reports.

In Chengdu, the capital of Sichuan province, Merkel attended an urban forum with provincial Communist Party secretary Wang Dongming, went shopping at the Shenxianshu Market and visited the FAW-Volkswagen factory, where she was hosted by VW CEO Martin Winterkorn and FAW group CEO Xu Jianyi.

Merkel is expected to hold a joint press conference Monday with Li and will also attend the China-Germany Economic and Trade Commission before meeting Xi. On Tuesday she will address students at Beijing's renowned Tsinghua University before departing for Berlin.