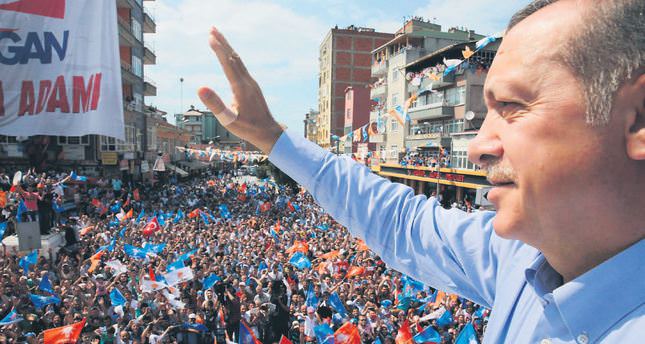 by Daily Sabah Jul 07, 2014 12:00 am
During the tenure of Recep Tayyip Erdoğan's AK Party government that has been ruling Turkey since 2002, the Turkish economy has gone through a number of drastic changes. Erdoğan, a political leader with a keen economic vision, is now seen by many as a shoo-in presidential candidate for the election on Aug. 10.

Economic growth has been at the forefront of Erdoğan's administration for the past decade. Experts argue that Erdoğan will maintain his rhetoric on economic issues and will be influential in Turkey's economic policies, if he wins. However, regional conflicts will challenge Erdoğan's economic
targets, economists say.

Speaking to Daily Sabah economist Dr. Erdal Karagöl, an academic at the Ankara-based Yıldırım Beyazıt University, said that the Turkish economy will not be challenged by fluctuations ahead of the presidential election, because the AK Party has not signaled it will make concessions on its fiscal policies to gain more vote. He stressed that after the election Erdoğan will play even a greater role in addressing economic issues. "The Turkish public institutions on economics have chronic structural problems which were not able to be overcome by the parliamentary system.

If Erdoğan becomes the first president elected by popular votes, he is expected to orchestrate the transformation process of public institutions," Karagöl said. Karagöl said interest rates will be one of the underscored items of Erdoğan's economic agenda. "As a leader who thinks that economic development depend on industrial production and research/ development activities, he will raise his voice against the Turkish central bank's tight monetary and high interest rates policies, provided that he becomes the president," Karagöl said.

Commenting on the issue economist Dr. Cemil Ertem said that private sector investments, employment and low interest rates have been the main items of Erdoğan's economic vision. "Erdoğan's economic vision will not change in the event he is elected. More importantly, he is expected to be more involved in Turkey's economic strategy, aiming to reach $500 billion (TL 1.06 trillion) in total exports (currently about $160 billion) and Turkey being one of the top 10 economies in the world by 2023 when it celebrates its 100th anniversary of becoming republic," Ertem said. He also stated that energy might be Erdoğan's top question after the election. Ertem remarked that Erdoğan is expected to conduct economic diplomacy mostly-focused on energy issues. "If Erdoğan becomes the president, Erdoğan's economic vision will cover near geographies from Balkans to Middle Asia and may bring prosperity to those regions because his economic vision is based on fulfilling mutual interests and cooperative development," Ertem told.

Speaking to Daily Sabah on the matter, economist and President of Nişantaşı University Dr. Kerem Alkin said that Turkey needs a new growth model to achieve economic success just as the economic success achieved between 2002 and 2009. "The new president is expected to find a new model which prioritizes private sector investments and increase the competitiveness of Turkish companies," he concluded.

Dr. Dündar Demiröz, economist and academic at Istanbul University, also commented on Erdoğan's probable election and its effects on the Turkish economy. Demiröz said that according to the Turkish Constitution, the president is responsible for fostering cooperation and collaboration between public institutions. "When we viewed Erdoğan's possible presidency from this aspect, he is expected to coordinate the works of public institutions which have to do with economics. It is known that Erdoğan is at odds with the central bank's law and its working principles, which occasionally contradicts with the government's fiscal policies. The Turkish central bank law says the bank is only responsible for price stability, which is quite unacceptable for a holistic economic view. We may see Erdoğan as a strategy maker who is working to achieve the 2023 economic targets," Demiröz noted.

While Turkish economists say these things, speaking to AFP, Andy Birch, senior economist at IHS Global Insight, said the central bank's independence was a "major concern" under an Erdogan presidency. However, AK Party Vice President Numan Kurtulmuş stated that after the 2008 global economic crisis neoliberal arguments have started being questioned.

One of the main discussions concerned the role of central banks with Kurtuluş citing U.S. President Barack Obama's description of the FED chairman as "someone representing the middle class, working for fair distribution of income and innovation." He further added that as the government, they believe state intervention in one of the most liberal countries in the world is not acceptable. "Revealing an inflation rate target of 5 percent is important however, when the normal development potential of the country is considered, aiming for 5 percent development is not correct. We cannot say the central bank is independent and the core of the matter is inflation and we have to act accordingly.

The central bank is only allowed to control price stability but it does not consider targets of development, growth and creating employment," said Kurtuluş, who added that if Erdoğan becomes the president, the central bank's stance will be changed.

According to AFP, Erdogan is credited during his more than a decade in power with turning around Turkey's economy, whose strong expansion has made it the envy of its European and Middle Eastern neighbors. However, the rise of a radical Islamist threat across Turkey's border in Iraq is also setting off alarm bells among investors. Moody's rating agency warned this week the conflict in Iraq could hit almost 15 percent of the country's exports, equivalent to 3 percent of its gross domestic product. "If the Iraq conflict continues for a prolonged period and also spreads to (Iraqi Kurdistan), it would have a material effect on Turkish exports... and would slow the country's economic growth," said Moody's.

As many as 550 companies had already halted imports to Iraq since the start of a lightning offensive by Islamic State of Iraq and the Levant (ISIL) in June, the head of the Turkish-Iraqi Business Council, Serif Ercument Aksoy, said last month.

Iraq was the second-largest buyer of Turkish goods last year, accounting for 8.0 percent of exports. "Exporters are bearing the brunt of the crisis next door and Turkey must find alternative routes because trade routes to Syria and now to Iraq are blocked," Nihat Ali Ozcan of the Ankara-based TEPAV thinktank told AFP.
Last Update: Jul 07, 2014 1:54 pm
RELATED TOPICS