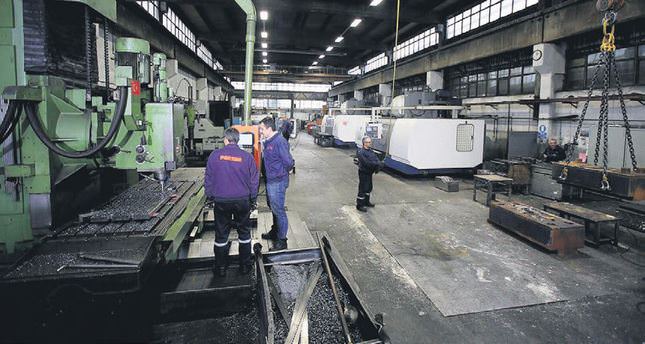 The trend of borrowing is increasing among businesses and industrialists are worried about a halt in production. Experts say measures must be taken in order to reach Turkey's economic targets for 2023, which include reaching $500 billion (TL 1.06 trillion) in total exports (currently about $160 billion) and establishing Turkey as one of the world's top 10 economies. As the Turkish daily Dünya reported, according to 2013 figures 129 out of the top 500 industrial enterprises in Turkey are running at a loss, meaning that one quarter of all top conglomerates are in the red. There has also been a drop of 4.9 percent in profitability for these companies.

The debt-equity ratios of the 500 companies on İSO's list is 132.4 percent, while the ratio for the companies on EBSO's list reached the highest point in the last few years increasing up to 191.4 percent.

The businessmen involved in production are therefore requiring immediate measures to be taken. Dünya newspaper spoke to the chairmen of some of the most important chambers of commerce that dominate Turkey's industrial production.

While industrialist demand measures from the government , they are also critical of their own actions. These chairmen also offer various suggestions to the managers and owners of these companies.

In order to continue production under financial restrictions, the chairmen demanded macro-economic conditions that will support the profitability of industrial enterprises to be secured by the state. The main issues reported were high production costs and the decline in profits due to high interest rates.

Further, the need to ensure stability in the foreign exchange market, increasing incentives in research and development for ensuring profitability through offering value added goods, providing more research opportunities on new markets and dividends to be accounted as expenses according to tax laws are measures also demanded to be taken by the government.

Speaking to Dünya newspaper, the Chairman of Chamber of Commerce in Kocaeli, Ayhan Zeytinoğlu stated that despite high sale rates, profitability was on the decline. "The reports indicate that the companies lack equity and there is an increasing demand for borrowing while profitability rates are declining. We believe this is due to the increase in interest rates in the second half of 2013 and the exchange rate depreciation," Zeytinoğlu said. He also underlined the importance of companies to have access to various financing resources. In Kocaeli, the equities of 87 companies included in the list of top 500 businesses have decreased by 6 percent when compared to 2012. The net assets of the companies in the region have increased by 24.8 percent and employment has increased by 5.4 percent despite the drop in equities. The chairman of the Chamber of Commerce in Adana, Zeki Kıvanç also highlighted the change required in interest policies. "The figures indicated that the cost of borrowing has increased in the private sector and the high interest rates are reducing the profitability of companies. Another issue is whether short-term loans are being hedged or not.

Any kind of conjectural constriction observed in our export market result in exposure of firms to currency risk," noted Kıvanç. He further said that the central bank's decision to keep the interest rates at a high level as a result of its policy that aims to maintain price stability and low inflation rates, the cost of borrowing has increased. "Therefore, Turkish companies cannot compete in the global markets. Changing the interest rate policies would increase the competitive capacity of Turkish firms," concluded Kıvanç.

The chairman of Konya Chamber of Commerce, Memiş Kütükçü on the other hand, highlighted the fact that a more active and involved development bank is required in Turkey. "Another important issue is why the private sector is borrowing. If the loans are borrowed for investments, this wouldn't cause any problems. However, if loans are used in production due to lack of operational capital, this would prevent the companies from growing," said Kütükçü.

He also blamed the increasing interest rates for the large debt-equity ratios companies are suffering from. "The top 500 enterprises in 2013 reserve 53 percent of their operating profits to cover their debts," noted Kütükçü and added, "In other words, resources that should be used for development and growth have to be used for covering financing expenses. The industrial enterprises should have access to cheap financing resources, which can be achieved by a better functioning development bank in Turkey."
RELATED TOPICS