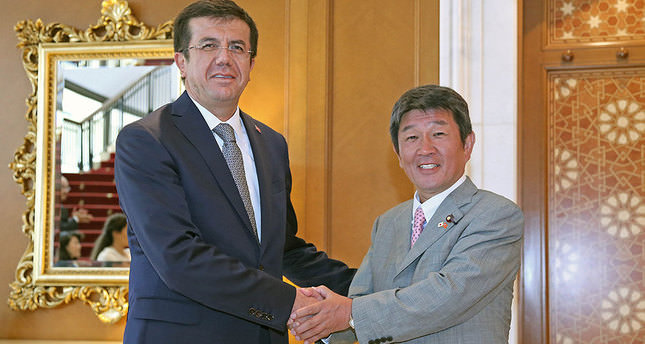 by AA Jul 08, 2014 12:00 am
The technical stage of negotiations towards an economic partnership agreement between Turkey and Japan has been completed, Turkey's economy minister has said.

Zeybekçi said: "We had a productive meeting with the Japanese minister and negotiations on an economic partnership agreement will be started with Japan as soon as possible."

Turkish Prime Minister Recep Tayyip Erdoğan and his Japanese counterpart, Shinzo Abe, had agreed on January 7 in Tokyo that the two countries would work towards a bilateral economic partnership agreement.

Motegi pointed out he was the first Japanese trade minister to visit Turkey.

"We are satisfied with developments and agreed to start negotiations for the partnership agreement later this year," he said.

Japan is the fourth-biggest exporter and importer in the world.

Although Japan's foreign trade volume was more than $1.7 trillion in 2012, Turkey's trade volume with Japan peaked at only $3.9 billion.

A total of 41.8 percent of Turkey's exports to Japan consist of food and beverages.

As the fourth-largest importer of food and beverages with a share of 5.7 percent of world imports, Japan has been one of the most important markets for Turkey.

Japanese exports of vehicles, electronics and energy equipment gave it a trade surplus of about $3.3 billion with Turkey in 2012.

Turkey has a one percent share in merchandise trade worldwide. Turkey's share of imports from Japan is two percent.

Turkish Prime Minister Recep Tayyip Erdoğan began his first foreign visit of 2014 to Japan in January, as part of his South Asian tour, accompanied by ministers and business people, with energy deals and economic relations at the top of the agenda.