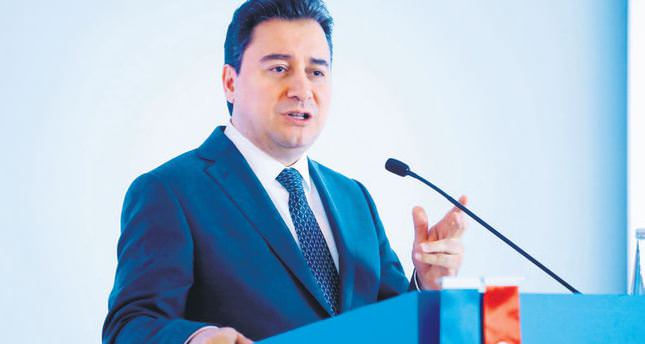 by Daily Sabah Jul 10, 2014 12:00 am
Turkey's chief economist said on Tuesday that the country's per capita income now exceeds $19,000 (TL 40,350) based on purchasing power parity, meaning the country has reached 60 percent of the EU and Japanese average levels of prosperity. Deputy Prime Minister Ali Babacan's comments made during a speech at an iftar dinner (Ramadan fast-breaking meal) organized by Turkey's Independent Industrialists and Businessmen's Association in Ankara. Pointing to "difficult periods" experienced by the world economy in the last seven years, Babacan said the largest economic crisis of the past 100 years was not over yet.

Turkey's chief economist went on: "Developed countries' high debt stock will remain on the agenda as a problem for many years. We're seeing signs of recovery in these countries but this recovery, particularly in Europe, is on a firm footing."

According to the World Bank the combined stock of developing countries' external debt increased by $464 billion to $4.9 trillion at the end of 2011. Babacan noted that a large increase in Turkey's export credit as Eximbank's business volume increased threefold in the last three years.

Babacan added that Turkey would have an intense reform agenda in the forthcoming period to deal with issues "especially in energy, where Turkey has challenges to decrease its imports, to increase its efficiency and to invest in nuclear energy." Referring to forthcoming political developments Babacan said, "After passing the 2015 election and no election until 2019, if the country undertakes needed reforms it will be very easy to reach its objectives by 2023."

Turkey holds a target to become one of the top 10 economies in the world by 2023 and increase annual Turkish exports to $500 billion. The first round of the country's presidential election will be held on Aug. 10 and the country's 18th general elections are due to be held in June 2015 to elect 550 new members of the Parliament.
RELATED TOPICS