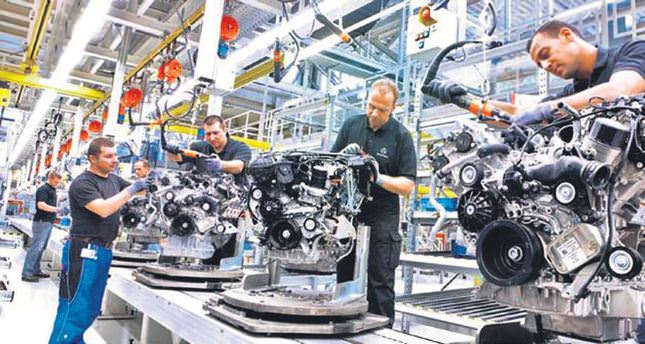 by Anadolu Agency Jul 11, 2014 12:00 am
The Organization for Economic Cooperation and Development (OECD) on Thursday raised Turkey's growth forecast to 3.3 percent for 2014 from its previous estimate of 2.2 percent in its May economic outlook report. The OECD retained its 4 percent growth projection for 2015. According to its bi-yearly Economic Survey of Turkey report, the economy will grow stronger in the coming years but remains dependent on domestic consumption funded by foreign finance. Turkey's economy continued its growth path for the 18th consecutive quarter, after growth projections at constant prices of 4.3 percent following Q1 of 2014. The growth rate in 2013 was 4 percent.

Separately, on June 23, the World Bank pointed to Turkey's high exports and sustained government demand when upgrading the country's growth rate forecast to 3.5 percent from 2.4 percent in a global prospect report. The OECD said Turkey should rebalance growth through monetary and financial policies which keep inflation, exchange rates and credit levels on sustainable paths. The Paris-based monitoring group warned about two major issues for Turkey: "The main risks to growth were domestic political tensions and possible renewed global financial market turmoil following monetary policy normalization in the U.S." Turkey held its local elections on March 30 this year and its first round of a presidential election will be held on August 10. The country's 18th general elections are due to be held in June next year to elect 550 new members of parliament.

The organization reports that Turkey's growth will also be affected negatively, mainly through weaker exports, if geopolitical risks were to intensify in some MENA countries, like Russia and Ukraine - which together account for a quarter of Turkey's exports. The organization also said Turkey's inflation is projected to fall in the second half of 2014 but should remain well above the five percent target, partly due to ongoing effects from exchange rate depreciation and tax hikes in January 2014. On January 29 this year, the central bank of Turkey introduced drastic interest rate rises in response to the rise of the U.S. dollar against the lira in mid-January. Turkey's central bank expects that foreign demand and net exports growth will support disinflation in the country and will lead to a significant improvement in the current account deficit in 2014. "A better overall regulatory framework is essential if the business sector is to remain a driver of strong and inclusive growth. Structural change in the business sector would strengthen competitiveness, exports, employment, income and savings, help rebalance domestic and external demand, and move the economy toward an externally sustainable path," the OECD said in the report. It also said Turkey should also implement the legislated - but not yet operational - state aid monitoring system to further improve trust in a rules-based environment.

Not only OECD but other international institutions also raised their expectation for Turkey's growth. U.K. bank Barclays raised its 2014 and 2015 growth forecast for Turkey following the country's strong export and recovering consumer demand in June. Publishing an outlook report for emerging economies, Barclays said in its report Turkey's growth was expected to accelerate starting from the second half of 2014. It said that the reason for the accelerated growth in the first quarter was because of strong exports which balanced stagnation in domestic demand. Barclays also noted decreasing political instability, better foreign demand and global environment for the capital inflows could speed up Turkey's growth. Barclays raised Turkey's growth forecast for 2014 from 2.2 to 3.3 percent while raising it from 3.5 to 3.7 percent for 2015.

Citi Bank, one of the largest U.S.-based global banks, revised up its 2014 growth forecasts for Turkey in June as a result of the figures announced in the first quarter and the possibility that the Turkish Central Bank will follow a more expansionary monetary policy.

It increased the growth forecast rate from 2.2 percent to 3.5 percent for 2014. Citi Bank further underlined that Turkish assets can benefit from the positive global outlook in the short-term however; the need for major foreign financing is still keeping the economy fragile especially when sudden changes that may occur in investor's trust are considered.

According to "World Economic Outlook Report for 2014" of the World Bank, the growth rate for the Turkish economy was expected to be around 2.4 percent annually; however, the real figures for the first quarter indicated a growth rate of 4.3 percent. Speaking to press on July 11, Andrew Burns, the director of the Global Macroeconomics Department of the World Bank stated that it was possible to revise the figures upward. "The strong economic growth observed in Turkey within the first quarter is in line with our expectations," said Burns.
Last Update: Jul 11, 2014 3:30 am
RELATED TOPICS