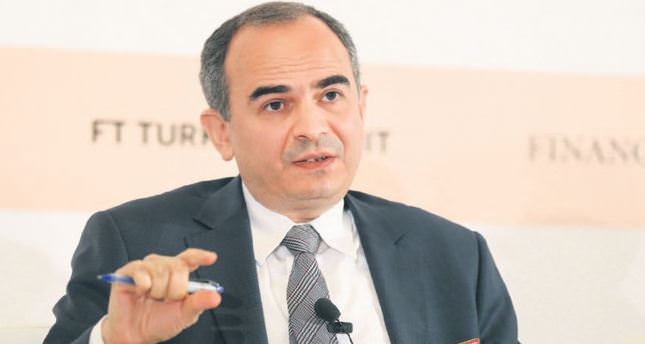 by Anadolu Agency Jul 18, 2014 12:00 am
The Central bank of Turkey (CBT) cuts its one-week repurchase rate to 8.25 percent from 8.75 percent on Thursday, saying that a "measured cut" was appropriate in the current economic situation.

The bank also lowered overnight borrowing rates from 8.0 percent to 7.5 percent to boost economic growth amid mounting political pressure for a looser monetary policy. The Monetary Policy Committee, which decides interest rates, cited significant improvements in the exchange rate, namely the stabilization of the Turkish lira after a 20 percent loss of its value against the dollar since the end of December 2013.


The committee also cited improvements in inflation outlook and in global liquidity conditions as additional reasons for reducing the benchmark oneweek repo rate to 8.25 percent from 8.75 percent after its regular monthly meeting. "Inflation expectations, pricing behavior and other factors that affect inflation will be closely monitored and the tight monetary policy stance will be maintained, by keeping a flat yield curve, until there is a significant improvement in the inflation outlook," said the statement released by the bank.

Turkey's Prime Minister Recep Tayyip Erdoğan and other government officials have criticized the central bank for maintaining high interest rates, which are possibly limiting economic growth. Deputy Prime Minister Ali Babacan, the government's main authority on economics, and Finance Minister Mehmet Şimşek have however supported the central bank's independence. The central bank had been expected to cut rates between 25 basis points and 75 basis points last Friday, according to 18 economists surveyed by Anadolu Agency.

The central bank had sharply raised key rates in January in response to a steep drop in the lira that had threatened a currency crisis. Turkey's currency had been under pressure since early last year amid pressure from Erdoğan for rates to be kept low. In January, the bank raised the one-week repurchase rate from 4.5 percent to 10 percent.

Erdogan's supporters in the government have called in recent weeks for the rates to be slashed back again. But the bank indicated that the time was not right for an aggressive cut to pre-January levels and it still had its eye on inflation. "Inflation expectations, pricing behaviour and other factors that affect inflation will be closely monitored and the tight monetary policy stance will be maintained," it said.

Annual inflation dropped to 9.16 percent in June from a two year high of 9.66 percent in May. But the bank also justified the economic rationale behind the decision to cut, saying that the "adverse impact of exchange rate developments since mid 2013 on annual inflation is gradually tapering off." The Turkish lira strengthened slightly against the dollar after the announcement, with markets apparently heartened that the bank was still showing a degree of independence.

At its last meeting on June 24, the bank had cut the benchmark rate by 75 basis points - following up on a 50 basis point cut in May, a move that met with only a very lukewarm approval by the government.
Last Update: Jul 18, 2014 1:27 pm
RELATED TOPICS