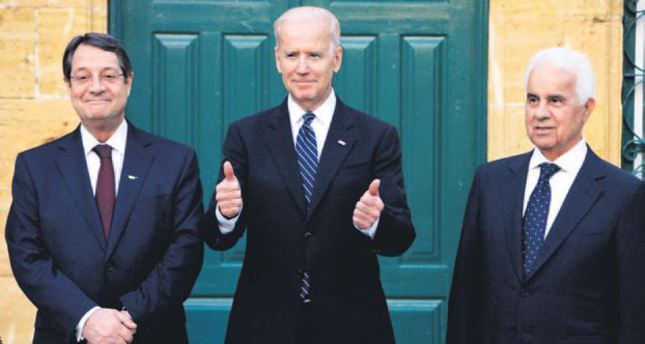 by AA Jul 22, 2014 12:00 am
Forty years ago Turkish troops arrived in Northern Cyprus after a Greek Cypriot attempt to impose a military junta. Despite a thaw in relations, the island remains divided, economically as well as politically. On the anniversary of the peace mission, Anadolu Agency (AA) took a look at how the economies on both sides of the island have fared since 1974.

During that period, the Turkish Republic of Northern Cyprus, known as KKTC, has been hard-hit by a U.N. trade embargo that has held back its development while it saw its southern neighbor gain admission to the EU in 2004.

However, Greek Cypriots were hit by the eurozone crisis and needed a 10 billion euro ($13.5 billion; TL 28.6 billion) bailout while Northern Cyprus' economy is looking up. "The embargo on Northern Cyprus adversely affected the economy of the North and prevented its integration into the region and the world," said Kamer Kasım, economics dean at İzzet Baysal University in western Turkey. "Tourism in the North occupies a dominant position in the economy but its income cannot pass a certain level because of the embargo."

Furkan Şenay, a foreign policy researcher at the Ankara-based think tank SETA, said: "The Greek Cypriot administration applied to the EU for membership in 1990. After this, Northern Cyprus continued to deepen its economic relationship with Turkey.

He added: "Cypriot banks were faced with massive losses after the Greek [euro] crisis and took a loan of 10 billion euros from the IMF and the EU. "The Turkish Cypriot administration grew 2.8 percent in 2013 but the Greek side's economy shrank by 5.3 percent and unemployment increased to 16.8 percent." Şenay claimed the possibility of reunification offers unique opportunities for both communities, especially for Greek Cypriots, who faced an economic meltdown in 2011. He said: "The solution for the Greek side that would bring the most significant economic benefit is normalized relations with Turkey.

"Turkey opening its airspace and sea ports to the Greek Cypriot administration would contribute hugely to the island's economy in line with exporting its energy resources to Europe. "At this point the solution is vitally important for a Greek Cypriot economy that did not achieve the expectations it had of EU membership." The economy of Southern Cyprus is suffering and, after a 2.4 percent drop in 2012, output fell by 5.4 percent last year.

To the north, GDP grew by 4.1 percent in the first quarter of this year. George Pamboridis, author of Hydrocarbons of the Republic of Cyprus, said the island's energy resources could usher in a new era of prosperity on both sides of the border. "If oil and gas become Cyprus' steel and coal, and if the island focuses on how the two communities could work together on a common future, the Cyprus problem will be a bad dream of the past," he said.
Last Update: Jul 22, 2014 12:36 pm
RELATED TOPICS