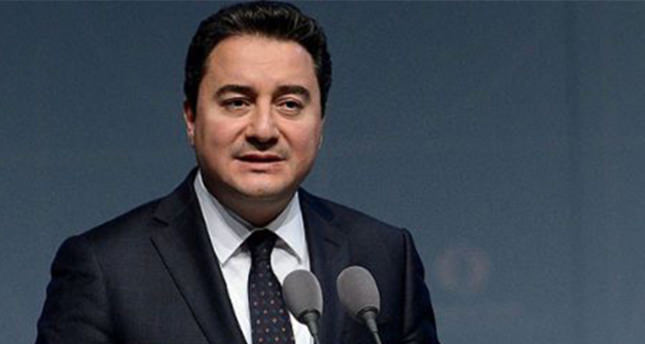 Deputy Prime Minister Ali Babacan said that from 2015 to 2019 and 2019 to 2023 Turkey will go through periods without any elections, which should be used to fix structural problems in the economy, implement legal regulations and, if necessary, establish a new constitution in an effort to boost the economy and improve the country's democratic credentials.

Deputy Prime minister Ali Babacan said "If Turkey uses this opportunity all targets set for 2023 can be achieved, but if that opportunity is lost, then it would be hard to achieve them."

Noting that the presidential election on Aug. 10 is crucial for stability in Turkey and when the "compelling geography" Turkey is located on is considered, Babacan noted that Turkey should become an island of stability and rise to be the key player in the region. The most important message of the presidential election should be "stability should continue," Babacan remarked and added: "Turkey is now in a state of stability because political stability is the core of everything." Speaking on the matter economist Hikmet Baydar noted that the main sector currently energizing the Turkish economy is construction. That fact disturbs economy ministers.

"When we talk about reforms, the first thing that comes to mind is improving the investment environment and making the industrial production sector the main driver behind the economic boom," Baydar said. He also underscored the imbalance of the sector's growth rate. "In a period with no election, Turkey should give weight to reforms aiming to increase the share of industrial production in growth and branding," Baydar remarked. He also stated that reforms should be put in to play not only in the private sector but also the public. "Turkey's tax collection system fails to cover all economic activities in the country. It is so complicated and ineffficient. That is why the government has to keep indirect taxes taken from gasoline, tobacco, food, energy, etc. so high, because the tax system does not allow the government to increase direct taxes, which should be taken from companies, not from citizens. Turkey should concentrate on these issues during a period with full political stability, between 2015 and 2019," Baydar added.

Commenting on the matter, economist Dr. Cemil Ertem said, "We will see whether we can reach our 2023 targets within the next four years. We should know what reform is. We need to determine the scope of the reforms. We need to decide whether some steps that will deepen financial markets including regulating the tax system and making Istanbul a financial center should be considered as part of the reforms. "One of the major expenditure items of the second largest 500 companies was bank charges. This shows that new regulations in the banking sector are inevitable.

Turkey should focus on and develop participation banking and project banking so that it can get rid of the problem of bank charges. In the process of turning to knowledge and an industry based society, Turkey should take necessary steps. It is important to know that stability will ease carrying out reforms." Economist and academic at Istanbul University Dr. Dündar Demiröz spoke to Daily Sabah on the issue. He remarked that political stability is the key to economic stability. "Between 2015 and 2019 Turkey should prioritize economic agendas, not political ones. Otherwise Turkey will not be able to achieve 2023 economic targets," Demiröz said. Demiröz stated that Turkey needs to raise its high-technology exports, which is only possible with public strategy, support and reform.

"The government should provide an investment-friendly stage for the companies that are capable of producing high-tech goods. An investmentfriendly stage is provided with easing and cheapening the borrowing for the firms," he concluded. The year 2023 is of great significance for Turkey's ruling AK Party, and not just because it marks the centennial of the establishment of the Republic of Turkey but because 2023 is the deadline for the ambitious economic targets set by the government which aim to take Turkey to the level of developed world economies. While redefining the vision of Turkey, the AK Party introduced its noteworthy strategic plan in 2008 under the title "2023 Targets."

However, experts emphasize that global economic trends may trip up Turkey on its way to achieving these economic targets for 2023. The 2023 vision primarily focuses on escalating Turkey to one of the 10 biggest economies in the world from its current ranking of 16th. Sustainable economic growth is the key in reaching the 2023 targets. For that reason, the Turkish government has developed several strategies that include increasing per capita income to $25,000 and annual exports to $500 billion, reducing unemployment to 5 percent and building export-oriented structures in the Turkish defense industry.
Last Update: Jul 24, 2014 1:21 pm
RELATED TOPICS