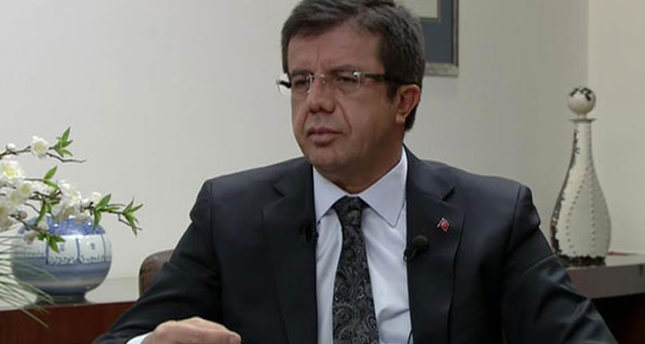 by Daily Sabah Jul 24, 2014 12:00 am
Economy Minister Nihat Zeybekçi stated yesterday that exports to Iraq between June 10 and July 20 had declined by 35 percent when compared to the same period last year, but that this regression would improve in general by the end of this year. The fall in exports will mean a loss of $2.5 billion in revenue if the crisis in Iraq continues until the end of the year.

Nihat Zeybekci welcomed the President of the Turkish Exporters Assembly, Mehmet Büyükekşi and the accompanying committee in his office, wishing the new management success in their managing term. Zeybekci noted that exporters' assemblies should play a more active role and added that 2015 is a very crucial year since Turkey will assume the presidency of the G20 for the year. "This week we will also announce that we will lead the presidency of World Trade Organization's Trade and Economy Ministers Summit. The Minister of Economy, TİM and other exporters' unions should strive to promote Turkey in order to reach our target of $500 billion in total exports." Zeybekci noted that they held a meeting with the exporters after the start of the clashes in Iraq and the anxiety has now been mostly removed. He also stated that they will hold weekly meetings from now on. The determination of the exporters, their knowledge of the region and their expertise increase the hopes for the forthcoming term, said Zeybekci.

No other country in the world has such various positive qualities in terms of "culture geography" as Turkey and it is expected that the purchase orders postponed will soon be ordered and demand will increase. If at the end of the year, exports with Iraq fall by 35 percent due to the ongoing troubles in the region since June 10, then Turkey will suffer a loss of $2.5 billion (TL 5.23 billion). However, Zeybekci noted that it is not possible for Iraq to acquire their requirements from anywhere else and also, Turkish products and brands have gained an incomparable reputation as they are suitable for consumption trends in Iraq. "Products exported from other countries cannot replace the products imported from Turkey. This is a huge advantage. We see this as a delayed demand which should be resolved soon," said Zeybekci. TİM's President Büyükekşi noted that even though the surrounding countries are in deep trouble, there was a 10 percent increase in exports in June and they will strive to organize one activity
each week.
RELATED TOPICS