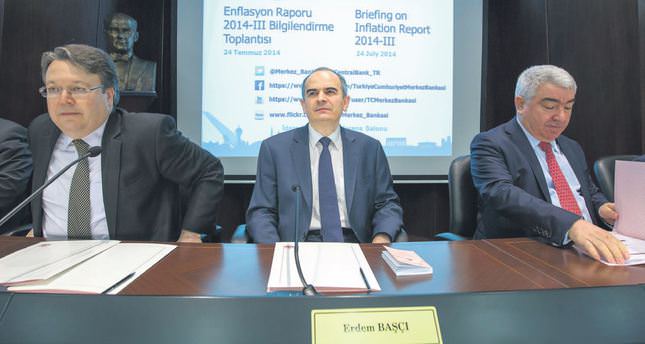 by Daily Sabah Jul 25, 2014 12:00 am
The Central Bank of the Republic of Turkey (CBRT), which has been harshly criticized by economists and politicians for its inaccurate inflation rate predictions, yesterday kept its inflation forecast in 2014 to the mid-point of 7.6 percent, and the 2015 inflation forecast at the midpoint of 5 percent. At a news conference announcing the bank's quarterly inflation report in the capital Ankara, CBRT governor Erdem Başçı said "Inflation is to be at the mid-point at 7.6 percent between 6.7 percent and 8.5 percent by the end of 2014.

The 2015 inflation rate is forecast to be between 3.3 percent and 6.7 percent with the mid-point at 5 percent." Başçı said inflation is forecasted to gain stability at the level of 5 percent in the medium term, and at the end of the year the annual inflation rate is predicted to be over the target of 5 percent due to the delayed effects of cost pressures stemming from exchange rates and the negative progress in food prices.

"Not only us, but you too should be convinced that the inflation would decrease to 5 percent next year, though it wouldn't achieve it this year. The citizens of Turkey should believe that the central bank would succeed this time. This is not an easy job. The indicators are positive. This is just the beginning; we must show our determination,"

Başçı said. "We gained so much experience through various political means and witnessed which of them are functioning. We also gained experience in terms of cooperation with the government. The cooperation is beneficial.

By activating all of these and using our political means properly, we will solve the inflation problem. Long term interest rates will dramatically fall. Decreasing the inflation to 5 percent will be useful for both financing stability and growth," Başçı said.

Başçı stressed the developments in foreign trade continue to support growth, adding that they have observed a considerable recovery in the current account balance since the beginning of the year and this recovery is expected to gather speed and go on during the second quarter.

He further noted that they forecasted economic activities to continue their recovery process during the second half of the year thanks to the global economy's inclination toward recovery, betterments in consumer reliance and a decrease in domestic and foreign uncertainties. Başçı said with the effect of embracing the current monetary policy and macro interim injunctions, the recovery would be gradual and mild. They also expect the domestic demand conditions to contribute to inflation's fall and the continuity of the betterment observed in the current account deficit, according to him. Başçı also underlined that the recent geopolitical developments might bear some downside risks in terms of growth and balancing directly through commercial activities and oil prices.

JP Morgan, a U.S.-based bank, released a public statement regarding Başçı's presentation on inflation rate. "Governor Başçı sounded quite confident in relation to the efficacy of the CBRT's monetary policies.

We understand that the CBRT is planning to continue cutting rates (at a slower pace of 25 basis points cut per month) as long as the markets allow them to do so, but is also planning to keep the upper band unchanged at 12 percent in order to prevent a sudden shock when the market changes its opinion on global prospects in general and on the lira in particular. We keep our call for a final 25bp cut in the policy rate in August but acknowledge the risk that there could be further 25bp cuts if the global markets remain complacent. Most importantly, Governor Başçı's speech had quite a dovish tone. The CBRT is confident that inflation will come down in the coming months and signals further cuts in the policy rate. Perhaps the most important part of the conference was when Governor Başçı mentioned that the markets were pricing a cumulative 50bp in cuts over the next three months. Başçı sounded as though he concurred, stating that this would correspond to a measured cutting cycle and so would a cumulative cut of 25bp or 75bp.

This supports the view that they have another 25bp of cuts in mind for the August meeting. Although we do not see any further cuts in our base case scenario, we acknowledge the risk of a few more 25bp cuts," said JP Morgan's Turkey office. Opening the day with a slight rise, the Index of Borsa Istanbul (BIST-100) focused on the CBRT's Inflation Report presentation. The index of BIST-100 started to rise after Başçı's announcements completed the first session by 1.17 percent of increase and reached 83,825 points.
RELATED TOPICS