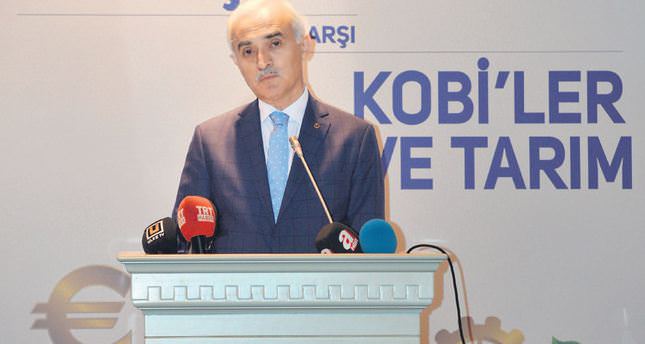 Small-medium enterprises, described as backbone of the economy, may contribute more to narrow Turkey's current account deficit, provided that they are supported financially, experts say

A prominent Turkish investment body has called for improving small- and medium-sized enterprises (SMEs) to battle against the "vicious circle" of Turkey's long-standing current account deficit. A new report from the Independent Industrialists' and Businessmen Association, MUSİAD, released in Istanbul on Wednesday said SMEs export amounts meet 90 percent of their imports and such firms should be promoted more than large-scale companies. Turkey's current account deficit is a persistent problem for the country's economy, although a decline was seen in the first period of the year. The deficit decreased by almost 40 percent in May and stood at $52 billion (TL 108 billion) annually. MUSİAD chief, Nail Olpak said the current account deficit was not simply a product of widely held views on Turkey's energy dependence and could be tackled through supporting the growth of SMEs.

"Holding energy imports, which make up 22 percent of the whole, as the sole reason distracts from the rest 78 percent of the imported goods," said Olpak, describing the energy item in Turkish imports as a "scapegoat." Energy imports cost $56 billion last year in its $251 billion 2013 total imports.
The MUSİAD chairman also pointed to financing problems as the biggest issue for small-scale enterprises, which creates threefourths of Turkish employment and more than 60 percent of total sales in the country. "Removing the disadvantages that smallmedium enterprises (SMEs) face is crucial for recovering from the vicious circle of current account deficit," said Olpak, saying large-scale companies export 40 percent less than SMEs and 50 percent more in imports.

Ömer Cihad Vardan, president of the Economic Development Foundation and fourth-term president of MÜSİAD, spoke to Daily Sabah on the matter and said "SMEs are the backbone of the economy not only in Turkey but also in developing and developed countries." Vardan stated that SMEs constitute more than 95 percent of total enterprises and employ millions of people in Turkey. "Authorities are expected to pave the way for SMEs in order to make them more stable.

In addition to that, the government should take steps to increase SMEs' innovation capacities, which will also contribute to SMEs' export of value-added products. That is the inevitable way for reducing current account deficit," Vardan said.

Stating that Turkey should bolster SMEs as a part of long-term economic strategy, Vardan said that Turkish SMEs have been in a promising position in recent years compared with the 2000s and earlier. "We organize regular visits to SMEs in Anatolian cities. During our visits we observe that SMEs are generally run...the quality of production and services that are served by SMEs are increasing with the new generations," Vardan said.

According to Vardan, political stability is important for SMEs as they expand their business abroad. Vardan stated that the Turkish economy in the past would deal with crisis and monetary fluctuations every 5-10 years which caused Turkish SMEs to be administered with a mentality that prioritized security of present belongings and costumer network instead of expanding abroad and exports. "However, with political stability, SMEs started to concentrate on exports and research and development activities," veteran businessmen said. He also said that there are still lots of steps to be taken to foster SMEs.

Economists also suggest that Turkey's current account deficit w ill continue to shrink in the following months and that it will drop below $50 billion by the end of the year.
RELATED TOPICS