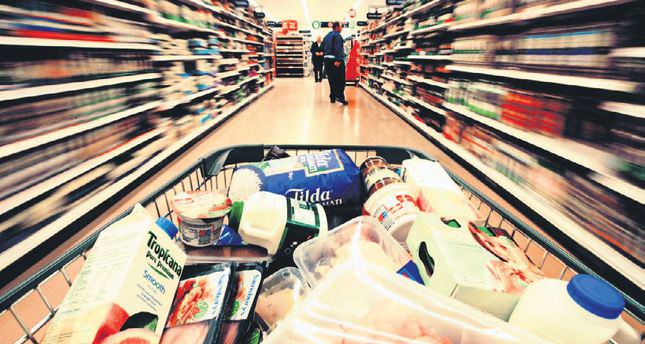 Turkish statistical institute reported on Monday that consumer price index has slightly risen in July due to the increase in communication services, food prices and chronic production cost pressure

Inflation in Turkey rose slightly last month, from 9.16 percent in June to 9.32 percent, mainly due to a rise in alcohol, tobacco, communications and restaurant prices, the country's statistical authority said. The Turkish Statistical Institute (Turkstat) reported the consumer price index rise on Monday, putting annual inflation well above the Central Bank of the Republic of Turkey's (CBRT) year-end forecast of 7.6 percent even further beyond the 5 percent medium-term target. Economists speaking to Daily Sabah agreed that the increase in inflation has stemmed from production cost pressure and increase in food prices. Turkstat said the producer price index was 0.73 percent, a 9.46 percent rise on July last year.

Alcoholic beverages and tobacco rose by 1.99 percent while communications services jumped 1.9 percent and the prices in hotels, cafes and restaurants rose 1.05 percent between June and July. There was a 3.28 percent monthly fall in the price of clothing and footwear. Compared to the same month last year, there was a 13.74 percent increase in hotel, cafe and restaurant prices, while food and non-alcoholic beverages rose by 12.56 percent, according to Turkstat.

The bank anticipates that inflation will slow as demand for exports rises, leading to a significant improvement in Turkey's current account deficit for 2014. In January, the bank introduced drastic interest rate hikes in response to the rise of the U.S. dollar against the Turkish lira. Governor of Central Bank of Republic of Turkey Erdem Başçı has insisted the bank would only reduce interest rates when it is convinced the outlook on inflation is improving.

However, despite annual inflation hovering at almost double its medium-term target, the bank cut benchmark interest rates for three consecutive months to 8.25 percent on July 17, in an attempt to boost economic growth. By comparison, inflation in the eurozone fell from 0.7 percent in April to 0.5 percent in May, well below the European Central Bank's overall target of two percent.

Economist Dr. Cemil Ertem commented on the latest inflation report and noted that continuity cost pressure heats the inflation rates up. "High interest rates increase the cost of consumer's goods and services. In addition to that, demand growth causes companies to hike their prices due to the lack of competition," Ertem remarked. Small- and medium-sized enterprises (SMEs) have a low profit margin, while monopolistic larger firms make huge profits. Those large firms are able to manipulate the prices while SMEs are overwhelmed by high cost pressure," Ertem concluded.

More importantly, Turkey's economic circles are locked to presidential election to be held on Aug. 10. After the election, the central bank will adjust its monetary policies, which are deployed to provide price stability, in compliance with the market's reaction to the result of the election," Baydar remarked. He also expressed his faith in the central bank's year-end inflation rate forecast. "The central bank will be able to live up to its 7.6 inflation rate target by the end of the year," Baydar claimed.

Speaking to Daily Sabah on the matter, an economist and President of Nişantaşı University Dr. Kerem Alkin noted that Turkey's struggle with high inflation is expected to last longer due to the consumer price index's calculation method and weight of items in the index. "According to TurkStat, food and non-alcoholic beverages cover 24.5 percentof the total consumer price index while the same items cover 11.4 of EuroStat's consumer price index. Therefore a periodical increase in food prices has a huge effect on the total index in Turkey. Turkey cannot solve this issue unless it has a more productive economy," Alkin said.

He also added that the central bank uses monetary policies to provide price stability through supply and demand equilibrium like all other developing countries' central banks. "Monetary tightening may have a temporary positive effect on the inflation rate, but if you want to decrease the rate you should produce more and meet the market's needs," he said.

Alkin further highlighted that the central bank may miss thee year-end inflation rate forecast because of the calculation method. "EuroStat takes the last 3 months' price averages while calculating the current month's inflation rate. That method prevents fluctuation in the index stemming from periodical price increases or decreases," the economist noted. He also remarked that Turkey's economy is under pressure from production costs. "Manufacturers pass the costs to the prices however they want. Expensive energy is another driver of cost pressures which heats the inflation rate
up," Alkin concluded.
RELATED TOPICS