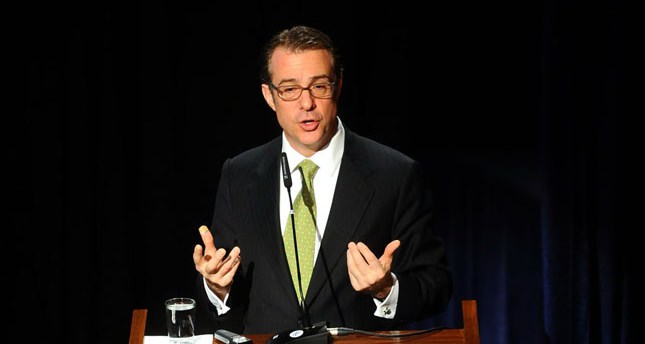 by Daily Sabah Aug 07, 2014 12:00 am
Mark Lewis has been the IMF's senior representative in Turkey since September 2010; however, his term in office recently concluded. "I witnessed very important developments in Turkey during the exercise of my duties. Despite huge breakages in the global economy, Turkey's economy proved its resistance to shocks. In other words, it proved its adequacy. The economy displayed a good performance. I think Turkey's economic policies are quite accurate, and the public finance and banking sectors are strong," said Lewis who is leaving Turkey today. Lewis described his experience in Turkey as "exciting."

Pointing out that Turkey and the IMF didn't run any program in his duty term, Lewis stated: "As part of article 4, we have had some normal relations with Turkey just as we do with China, the U.S. and France. We have collaborated on research and education, and we have had some dialogues about economic policies." Lewis said that Turkey has been playing an important role in economic coordination on a global scale, which could be seen from Turkey's roles in the G20 and IMF. Lewis unwillingly answered a question about interest rates. He said: "We wish interest rates could be lower, which will be for the benefit of Turkey. Current interest rate levels are far better than the previous ones." Lewis put an emphasis on Turkey's increasing exports to Europe despite the risks of the region where it is located.

"Turkey's economy is very strong. One of the most important indicators of that is Turkey's flexibility with regional and global developments," noted Lewis. He added: "More savings are needed. If Turkey wants to grow, it should invest, and to be able to invest, it needs to save. Making investments with external sources causes pressure on growth by increasing the current account deficit. Savings must be increased to assure stability, and inflation must be decreased to increase Turkey's competitive capacity. Also, reforms are necessary to make the economy more competitive.
Last Update: Aug 07, 2014 12:52 pm
RELATED TOPICS