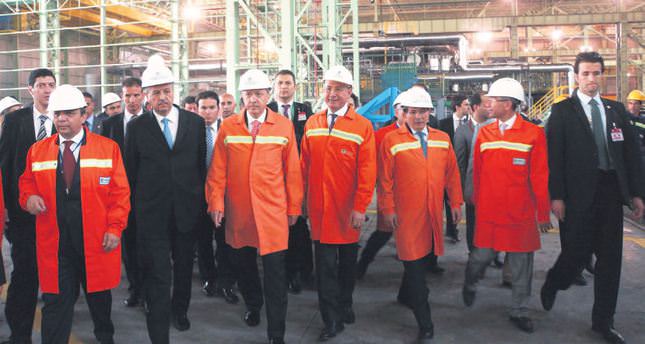 The Turkish President Recep Tayyip Erdoğan vanquished his two rivals in the election and became the first president in the country's history elected by popular vote. Erdoğan, who has ruled Turkey as prime minister since 2003, has transformed the country with modernization projects, the established a competitive and liberalized private sector and re-structured the banking sector. Economists interviewed by Daily Sabah agreed on the opinion that the Turkish economy will benefit from Erdoğan's presidency.

The Turkish economy will grow more

Speaking to Daily Sabah, Chairman of the Economic Development Foundation Ömer Cihad Vardan, said that the Turkish economy will keep its growing pace with the political stability. "The Turkish cabinet and president will pull together, which is quite important for economic stability," Vardan noted. He further said that Erdoğan's victory implies that the majority of the Turkish public stands behind Erdoğan's economy policies. "Erdoğan came up with the motto of 'new Turkey' during his election campaign, which has a great economic reference including the target of Turkey being one of top ten economies in the world by 2023," Vardan concluded.

Markets to praise the election results

Also speaking to Daily Sabah, veteran economist and President of Istanbul-based Nişantaşı University Dr. Kerem Alkin underscored that Erdoğan's victory ensures the political stability in Turkey, which is a key issue for economic stability. "The presidential election was the first step on a long political adventure that Turkey has set off on. Markets will praise the results of the elections in the short term, however, the construction of new a cabinet and the parliamentary election to be held in 2015 still stand as prospective mood-killers," Alkin noted. He also predicted that Erdoğan will not make any changes in his close economy circle.

Hikmet Baydar, a veteran economist, told Daily Sabah that the atmosphere of uncertainty due to the election has disappeared and a period in which the markets are manipulated by rumors has ended. "Although many things are getting clear in domestic economic issues, some negative developments in global markets are still continuing and this situation will surely affect Turkey," Baydar said. Baydar also remarked that President Erdoğan is expected to share his opinions about the economy. "But it is too soon to comment on to what extent the government is going to pay attention to the opinions of the new president. Erdoğan is going to continue to have a voice in the economy by meeting with the economic administration and his economic experience of 12 years is a significant asset," Baydar told Daily Sabah. He further noted that Turkey has a long term economic target, and to carry them further Erdoğan can take the lead in making new economic policies. "Erdoğan will try to make more active the introduction of the Turkish economy into foreign countries. We can say that he will make an effort to increase Turkey's share in international projects; in other words, he will use diplomacy for economic purposes," Baydar concluded.

Former chairman of the Independent Industrialists' and Businessmen's Association (MÜSİAD) Dr. Ömer Bolat told Daily Sabah that this election proved that the Turkish people approved of the actions of former prime minister Recep Tayyip Erdoğan and that they believed in his economic targets. "The stability of the AK Party is a sign of economic growth and development for the people. This election will affect domestic markets positively. Foreign investors are going to witness the growth that will continue and see Turkey as an investable country. Turkey has been a stable port for 12 years despite the economic crises and conflicts in the region. Electing Erdoğan as president is going to strengthen this position of Turkey," Bolat stated.

Economist Dr. Cemil Ertem noted that Erdoğan will lead the re-constructions of all institutions regarding the economy. "He is going to be more effective because the Turkish people want this. There might be people who cause tension for the economic administration but it won't change the perspective of foreign investors concerning Turkey," Ertem said. He also noted that Erdoğan is expected to work hard to improve the investment climate in the country. "We expect that he will focus on economic issues since he will be far away from political issues. Erdoğan will be a president who follows export opportunities in person and encourages businessmen. He will make a great effort to conclude energy projects that Turkey has gained ground on recently," Ertem remarked.

International credit rating agencies increased Turkey's rating from noninvestable to investable in the same period. Economists highlight that when the AK Party came to power in 2002, the inflation rate was around 30 percent and interest rates were around 45 percent on average. Currently the inflation rate is around 9 percent and interest rates are around 10 percent. According to data collected from Turkey's central bank, Turkey's foreign exchange reserves were $28 billion, while reserves reached $136 billion in 2013.
RELATED TOPICS