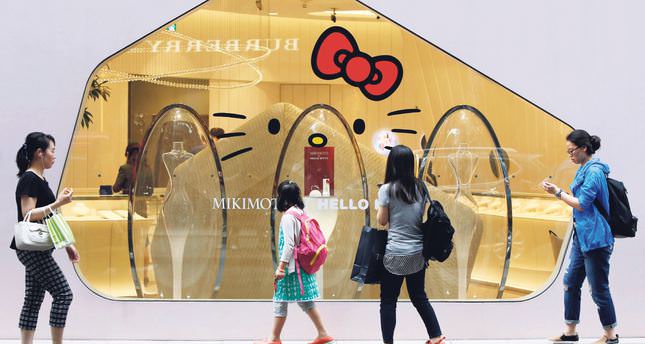 The Japanese economy shrank at an annual pace of 6.8 percent in the second quarter after spending got slammed by a sales tax hike that kicked in from April

A sales tax hike last quarter drove Japan's economy into its biggest contraction since the March 2011 earthquake and tsunami, Cabinet Office data showed yesterday, keeping policymakers under pressure to expand fiscal and monetary stimulus should recovery falter again. The April 1 sales tax hike took a heavy toll on household spending, shrinking the world's third-largest economy by an annualised 6.8 percent from April through June, and wiping out growth of 6.1 percent seen in January-March as consumers went on a shopping spree to avoid the higher tax.

The median market forecast was for a 7.1 percent drop. Seeing the slump as temporary, however, the Bank of Japan remains publicly convinced the economy is on course for a moderate recovery and has no plans to expand stimulus any time soon. The soft data, though, could compel the central bank into trimming its rosy fiscal year economic projections when it reviews them in October. If third quarter growth proves weak the BOJ may also come under pressure to add stimulus - particularly before Prime Minister Shinzo Abe decides later this year whether to implement a second sales tax hike from 8 to 10 percent in October next year, analysts say.

"Should the next quarter be weaker than expected, there's the chance that the BOJ will be called on to do some more easing - and how the BOJ responds then will be another point to watch," said Yuichi Kodama, an economist at Meiji Yasuda Life Insurance. Economics Minister Akira Amari signalled the government's readiness to compile an extra budget later this year should growth in the third-quarter stay weak, although any fiscal stimulus would probably not be big enough to have a major impact on the economy, given Japan's dire government finances. "At the moment I don't feel the need (to prepare an extra stimulus) but we will take necessary steps as appropriate depending on economic developments from now on. Appropriate steps mean every possible measure," he told reporters after the data was published.

On a quarter-to-quarter basis, Japan's economy shrank 1.7 percent in the second quarter, less than a median forecast for a 1.8 percent fall. The second-quarter contraction was the biggest decline since the first quarter of 2011, when the devastating earthquake and tsunami in March disrupted factory production and chilled household spending. Private consumption, which makes up about 60 percent of the economy, fell 5.0 percent in the quarter, more than the 4.3 percent drop forecast by markets.

Capital expenditure also slumped 2.5 percent, a worrying sign for policymakers counting on companies to support recovery by increasing their spending. External demand added 1.1 percentage points to GDP, after shaving 0.2 point off first-quarter growth, but was mostly due to a fall in imports. Exports fell 0.4 percent in the second quarter, underscoring how much the failure of exports to rebound is weighing on the economy. Many analysts expect a pick-up in July-September as the tax hike impact fades, with some projecting an annualised expansion of around 3 percent to 5 percent. A tightening job market is gradually pushing up wages and big firms have boosted summer bonus payments, which augurs well for consumption. Still, a majority of economists project growth for the current fiscal year, which began in April, to fall well short of last month's BOJ projection for a 1.0 percent expansion. BOJ Governor Kuroda has repeatedly stated he would not be surprised to see a contraction in April-June economic activity, and that there was no need to offer additional stimulus as growth is set to rebound in July-September.

Some analysts pointed to a rise in inventories in the second-quarter GDP data as a sign that companies, having underestimated the tax hike effect, added excess inventory and will scale back production in coming months.