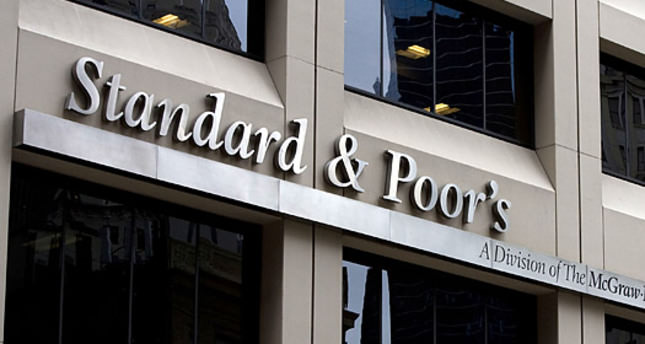 by AA Aug 14, 2014 12:00 am
The Standard & Poor's ratings agency has increased the estimate for Turkey's 2014 growth rate from 2.4 percent to 2.9 percent, and projected next year's growth rate as 3 percent supported by strong growth in exports.

During an interview with Anadolu Agency, Tatiana Lysenko, director at Standard & Poor's (S&P) and senior economist responsible for macro-economic forecasting for Turkey said, "This year and in 2015, the Turkish economy will display relatively slower growth compared to the previous years. Turkey's economic growth forecast for this year, which was projected as 2.4 percent in the report released in May, has been increased to 2.9 percent with a recent update, while it has been revised as 3 percent for 2015."

Reminding that economic growth may be affected by the level of domestic demand, she said, "in our opinion, as the domestic and external financial conditions are harder and high inflation restricts purchasing power, the domestic demand will run in a more settled way compared to the last year."
Highlighting that the share of exports in Turkey's growth has increased, Lysenko continued, "We predict that Turkey's exports will display a solid performance. Moreover, price competition, which stems from the slower progress of the lira, also supports exports."

Apart from gold, imports remained stagnant between January and May. We are of the opinion that Turkey's current account deficit continues to be a source of vulnerability."

Lysenko stated that Turkey's inflation hovers above predictions and both core and headline inflations have risen again in July and added, "We expect that the year-end inflation in Turkey to be around 8.8 percent.

This is above the 5 percent that was targeted by the central bank. The run-up in the consumer prices indicates that inflation forecasts start to become unstable."

She further noted that the tension between Russia and Ukraine is the most challenging geopolitical risk for Turkey and other developing countries, and that geopolitical developments have played a bigger role for the Turkish economy this year. "Turkey's need for natural gas has grown rapidly since 2000, where Turkey exports 4 percent of its total exports to Russia and approximately four million Russian tourists visit Turkey annually. For all these reasons, developments regarding Russia will have a limited influence on Turkey," she added. "The food import embargo imposed by Russia against Western countries may contribute to Turkey's exports. This may uphold Turkey's fruit and vegetable exports to Russia.

However, we think that the major risk for Turkey is the geopolitical uncertainty between Russia and Ukraine. If this crisis escalates further, it may trigger a negative standpoint for investors in the emerging markets."

In a written statement released earlier this week, S&P expressed, "Prime Minister Recep Tayyip Erdoğan has won the presidential race in the first round and he will be succeeded by another figure from the AK Party. That is why we do not expect a major change in the overall trend of Turkey's macroeconomic policies. We believe that this outcome will not lead to any changes in the efficiency of Turkish institutions and management system."