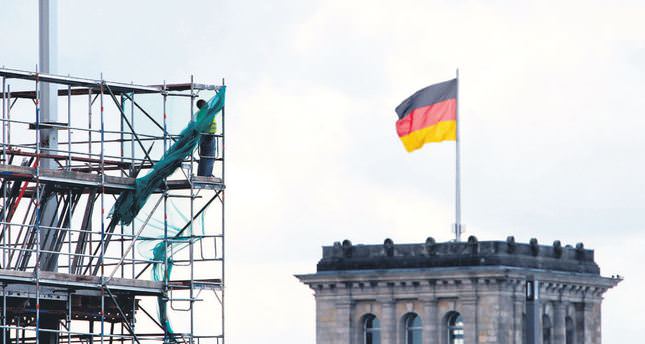 The zero growth reported by statistics agency Eurostat on Thursday was cause for alarm throughout the 18-nation region, which is already bracing for the impact of sanctions imposed on and by Russia over Ukraine. Germany, Europe's largest economy, contracted by 0.2 percent in the quarter, undercutting Bundesbank forecasts that gross domestic product would be unchanged.

Foreign trade and investment were notable weak spots, the German Statistics Office said on Thursday. "Today's figures show that the upturn remains too weak to withstand external shocks" - such as the Russian sanctions - "meaning that GDP growth will probably remain stuck in stop-and-go mode," said Peter Vanden Houte, chief euro zone economist at ING. France fared little better; its GDP failed to grow for the second quarter in a row. That forced the French government to confront reality, saying it would miss its budget deficit target this year and cutting its 2014 forecast for 1 percent growth in half.

Italy, the euro zone's third-largest economy, slid back into recession for the third time since 2008 in the second quarter, shrinking by 0.2 percent. Pressure grew on Prime Minister Matteo Renzi to complete promised structural reforms. Rome and Paris have led a drive to focus EU policy more on jobs and growth than on cutting debt. Germany and others have made clear they will only tolerate so much debate on that point. Bundesbank chief Jens Weidmann said on Wednesday that euro zone monetary policy should not aim to weaken the euro.

Individual member states should take steps to boost growth, he said, rebuffing French calls for Germany and the European Central Bank to do more.
The European Commission said Thursday's GDP report showed the importance of structural reforms. "The ongoing adjustment in the euro area today is a story of a deep structural change," a spokesman for the European Commission told journalists. "External developments may increase uncertainty, but foundations remain intact."

German Economy Minister Sigmar Gabriel blamed his country's slowdown on threats from eastern Europe and the Middle East, and a weaker euro zone. Also, he said, construction continued during a mild winter, so the second quarter did not see the usual recovery in building work. But German GDP should increase in the remainder of 2014, Gabriel said. "Growth rates in Germany will likely return to growth in the rest of this year, but the risks from abroad have, without doubt, increased," he said in a statement.

France maintained its pro-growth, anti- austerity stance. "We must adapt the pace of deficit reduction to the exceptional situation ... of growth that is too weak everywhere in Europe and the exceptional situation of inflation that is too weak across Europe," the country's finance minister, Michel Sapin, told Europe 1 radio. There was no mention of the 2015 goal, when France's public deficit is due to come into line with the EU's cap of 3 percent of GDP. Sapin said Paris would cut its deficit "at an appropriate pace".

Other euro zone countries were a little more robust. The Netherlands reversed a first-quarter contraction to expand by 0.5 percent, Austria was up 0.2 percent on the quarter and Finland eked out 0.1 percent growth. Analysts mainly saw foreign trade and investment behind the disappointing data. Consumer demand probably helped second- quarter growth - retail sales rose 0.4 percent on the quarter.

Surveys suggest a rebound in the third quarter is growing less likely. The ZEW economic sentiment index released on Wednesday, for example, showed German analyst and investor morale plunged in August to its lowest in more than 1 1/2 years. "Downside risks heading into Q3 have intensified, mainly due to the intensification of geopolitical tensions, the outlook for exports to Russia in view of the potential effects of sanctions on Russia ... and the effect of heightened uncertainty," said Evelyn Herrmann, an economist at BNP Paribas. "Bottom line is that the ECB will have to maintain an extremely accommodative monetary policy, even if the U.S. will see a first rate hike already in 2015. The bank will likely be pressured to undertake additional action if some of the downside risks materialise,"