FDI to Turkey increases 28 pct in the first half 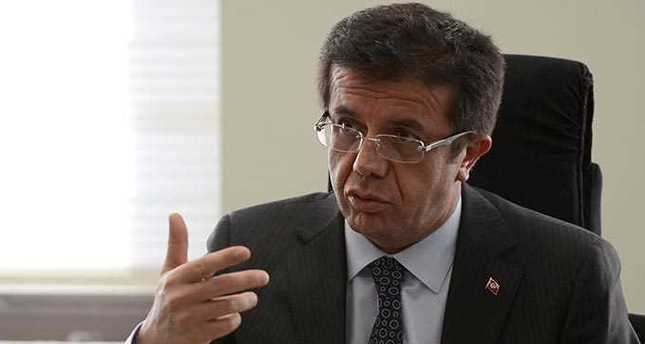 by Daily Sabah Aug 21, 2014 12:00 am
Economy Minister Nihat Zeybekçi said yesterday that Turkey continues to be a safe harbor for international investors as foreign direct investment increased by 28 percent and totaled $6.73 billion (TL 14.66 billion) in the first half of the year. Turkey has been continuing on a safe road since the beginning of the year despite negative speculations, said Zeybekçi, adding that the FDI to Turkey in June alone was $990 million.

The Turkish Minister of Economy Nihat Zeybekçi said "This figure shows that there was an increase of 28 percent when compared to last year's figures. Last year, direct international investments were around $5.28 billion." 68.1 percent of foreign direct capital inflow was from EU countries ($3.6 billion) while 14.1 percent was from Asian countries ($741 million). The top three E.U. countries that invested the most in Turkey were respectively the Netherlands with $1.7 billion, the U.K. with $793 million and Italy with $432 million. The top three Asian countries were Azerbaijan with $171 million, Japan with $153 million and Saudi Arabia with $111 million.

When the direct foreign capital inflow according to sectors invested is examined, it is revealed that the service sector was number one with $2.31 billion, followed by the manufacturing sector with $1.93 billion and the energy sector with $901 million.

Within the service sector, finance and insurance were the areas that experienced the highest investment with $1.79 billion foreign capital invested, while electronic and optic product producers gained the most investment within the manufacturing sector with $681 million. Zeybekçi also noted that of the 2,181 companies, 2,105 were international capital companies and 76 were subsidiaries of domestic capital companies which were established within the first six months of the year. He further stated that 1,001 of these companies were founded by investors from near and Middle Eastern countries, while 640 were founded by European investors.

As of the end of June, 39,738 companies in total own foreign capital and 82 percent of these are new companies, 16 percent are affiliates and 2
percent are branches of foreign companies. 48 percent of the companies with foreign capital were founded by European investors and 26 percent by near or Middle Eastern investors. Zeybekçi noted that Germany has the highest number of investors with 5,891 companies established in Turkey, followed by the U.K. and the Netherlands. Turkey's foreign capital companies mostly operate in wholesale and retail trade and also in real estate, leasing, business activities and manufacturing sectors.
Last Update: Aug 21, 2014 1:46 am
RELATED TOPICS