Turkey’s economic success not based on individuals but institutionalization 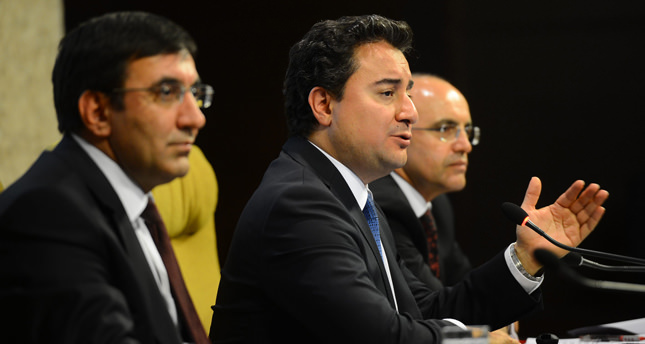 President-elect Recep Tayyip Erdoğan has based his political success on a strong Turkish economy, despite a challenging external environment. The domination of Erdoğan's Justice and Development Party (AK Party), which came to power in 2002, was built out of the ruins of Turkey's economic crisis in 2001 when the stock market crashed, inflation and interest rates soared. The AK Party has since overseen average annual growth of 5 percent since 2003 and the rise of many ordinary Turks to European levels of prosperity. Economists think that Turkey's economic success will continue to grow thanks to institutionalized public institutions no matter who the top economist will be in the new cabinet.

The external environment has grown less benign for Turkey in recent months, as the U.S. Federal Reserve has tapered down its stimulus program that benefited emerging economies and the strife in Iraq has robbed Turkey of a major export market. However, Turkish exporters made up their loss from the Iraqi market, which used to be Turkey's second largest market with total annual exports of $12 billion (TL 25 billion), by expanding their share in the European market. According to statistics released by the Turkish Ministry of Economy, Turkey's total exports to EU countries has risen by 13 percent in the second quarter of 2014, which is considered as a evidence for an experienced and shock-resistant private sector in Turkey.

Independence of the central bank has been malevolently questioned by international business circles when Erdoğan pushed it to cut interest rates at a time of rising inflation and slammed the bank for its tight monetary policies that interrupted the country's economic growth. In response to criticisms to Erdoğan from the international economy circle for his remarks on central bank's monetary policies, AK Party Vice President and veteran economists Dr. Numan Kurtulmuş said that after the 2008 global economic crisis neo-liberal arguments have come under question. One of the main discussions concerned the role of central banks with Kurtuluş citing U.S. President Barack Obama's description of the FED chairman as someone representing the middle class, working for fair distribution of income and innovation. "However, in Turkey, the central bank is only responsible for providing price stability, which is not acceptable. The central bank should not sacrifice the government's growth and employment policies to provide price stability. This should change," he added.

Although Moody's and Fitch have both warned that the lack of political stability after the presidential elections risks harming the Turkish economy ahead of parliamentary elections in 2015, economists think that Erdoğan's decisive victory in the presidential elections and the AK Party's current vote rate show that new AK Party government will be backed by the public. "Turkish people still support the AK Party no matter who occupies the top posts in the government. It is cannot be said when the public trust in a new government. I believe international rating agencies are deliberately making negative comments on the future of Turkish economy, or they are too chary about giving compliments to the Turkish economy," economist Dr. Cemil Ertem told.

Speaking to Daily Sabah, the president of Nişantaşı University and economist Dr. Kerem Alkin noted that public institutions regarding the economy have evolved in the 12 years during AK Party rule. "At an event in autumn 2013, I had a conversation with Ali Babacan. During our little talk, Babacan told me Turkey's economic stability and its economic strategy are not based on individuals. From this point of view, I hardly think that Turkey's economy will not be profoundly affected if a substitution happens in top economy management team," Alkin noted. He further noted that Turkey has moved away from conducting populist economic policies, which are considered as solid evidence for institutionalized economy administration.

Speaking to Daily Sabah, economist Hikmet Baydar said that Turkey's long and middile-term economic targets will be preserved no matter who is in charge. "In broad terms, no change is expected in Turkey's economic vision which prioritizes growth, decreasing unempolyment, interest rates and inflation when the new cabinet comes to power. However, the dovish or hawkish attitude of some top officials like the president of the central bank may cause a little change in economic atmosphere," Baydar told.

Economist Dr. Cemil Ertem commented on the issue and noted that not only public institutions but also mindset of industrialists and capital holders have changed during last decade. "Turkey has gained a new economic perspective during AK Party governments which is not expected to vanish when some ministers and top officials leave their posts. Moreover, back in 2002, when the AK Party came to power, there were not too many qualified economists in the country who could manage the large-scaled economic programs. But now, Turkey has great human resources in the field of economics which means individuals are not important for a stable economy as they used to be in the past," Ertem said.