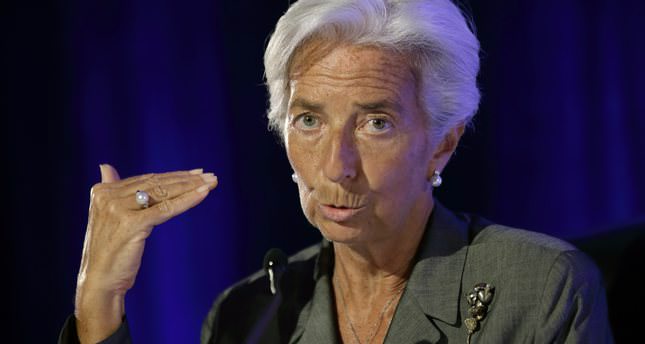 Christine Lagarde thinks Germany should play a bigger role in propelling economic recovery in Europe, she hinted in an interview broadcast on Monday. Parts of her remarks may be interpreted by personalities on the left of French politics as going in the same direction as the criticisms of French, German and European Union austerity policies by French Economy Minister Arnaud Montebourg on the weekend.

Montebourg's attack on the thrust of the French Socialist government's policy caused a crisis on Monday when President Francois Hollande told Prime Minister Manuel Valls to form a new government.

Lagarde told the Swiss public broadcaster RTS: "What I think is very important for Germany is to participate in the recovery movement in a very intense way. It has the means to do so." Describing the European economic recovery as "laborious", the head of the International Monetary Fund stressed that the continent's economic powerhouse had "room to maneuver," as seen in recent wage negotiations. "That leeway has been disclosed in the salary negotiations between the unions and the employers' organizations," she said, adding "hopefully that movement will be amplified and will help propel the European recovery."

Last month, Bundesbank chief Jens Weidmann said that German wages had the scope to rise by up to three percent because "we are practically in a situation of full employment." But this runs counter to many on the German right, including Chancellor Angela Merkel, who believe that the low-wage policy has given the country its competitive edge. But France, which remains mired in a stubbornly slow economic recovery, and other European states have argued that Berlin's big foreign trade surplus is hurting them.

Since the start of the eurozone debt crisis in 2010, Germany has faced accusations that by not using its standing as Europe's biggest economy to do more to kick-start growth, it is leaving struggling partners in the lurch. On Saturday, Montebourg criticized German austerity measures and warned that France would no longer "be pushed around." He told the Le Monde newspaper: "You have to raise your voice. Germany is trapped in an austerity policy that it imposed across Europe."

Those comments follow Germany's snubbing of a request from French President Francois Hollande earlier this month for an EU-wide shift of economic policy in order to encourage growth. Asked by RTS how Europe should toe the line between "austerity" and "recovery," Lagarde meanwhile said "a lot of austerity" had been put in action. "We have seen a process of very strong budget tightening over the past three years," she said, adding that "fortunately, in 2014 and 2015, this budget tightening is much weaker. "We find that adjustment appropriate for the time being," she said, stressing "more should not be done".
RELATED TOPICS