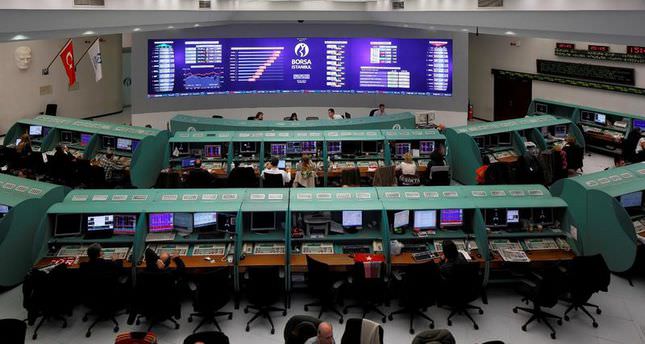 by Daily Sabah Sep 01, 2014 12:00 am
Companies whose stocks are trading on Turkey's stock market, the Borsa Istanbul 100, have slightly recovered from the damage caused by high interest rates and foreign exchange rates that occurred as a result of the Gezi Park protests and the Dec. 17 coup which was orchestrated by the Gülen Movement's followers. Political stability has now been restored after the local elections on March 30 and the presidential election. The inflow of funds to developing countries continues and a partial improvement has been observed in consumption which improved the balance sheet statuses for businesses.

As increases in foreign exchange rates slow and interest rates have been kept steady, financing costs have decreased and triggered an improvement in the balance sheet figures of various companies.

In the first six months of the year 264 companies were making profits - a number which has increased to 302 this year. The number of companies that are making a loss has dropped down to 113 from 151 in the first half of 2014. The Dec. 17 coup attempt boosted the interest and foreign exchange rates where in 2013, the U.S. dollar appreciated by 20 percent and the exchange rate of the dollar became TL 2.13 while the euro appreciated by 25 percent, increasing to TL 2.93.

At the end of March this year, the exchange rate of the U.S. dollar was TL 2.16 and of euro was worth TL 2.97. Due to expectations that political stability restored after the local elections at the end of March will continue and the inflow of funds to developing countries due to the monetary policies of the Federal Reserve and the European Central Bank, the increasing trend in interest rates and foreign exchange rates stopped. The dollar's exchange level was at TL 2.12 and the euro was at TL 2.90 by the end of June this year. The company that announced the highest profit numbers in the stock market was İş Bank, with TL 1.64 billion.