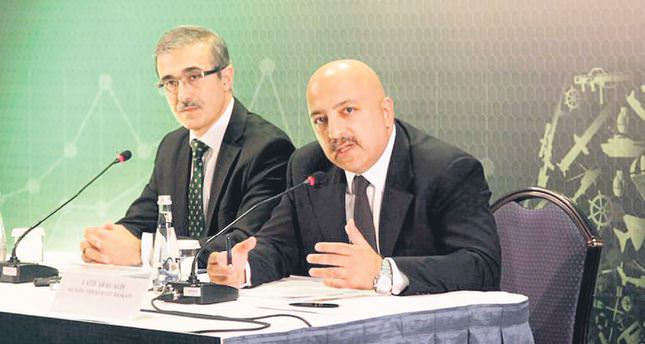 Undersecretary for Defense Industry İsmail Demir said at a press conference on Friday that it is not possible to achieve middle and long-term economic goals including becoming one of the top 10 economies in the world by 2023 - the centennial of the foundation of the Republic and increase annual Turkish exports to $500 billion (TL 1.08 trillion), which are currently $160 billion, with the current performance of the defense industry. He also stressed the necessity of radical changes in the sector to fulfill these objectives.

Demir noted, "Turkey is not a market for the technologically advanced countries, which are the movers and shakers of the defense industry and whose economies are among the top ten in the world. Turkey is no longer a country to market defense equipment and this is very important. "Touching upon the difficulty of giving precise figures about Turkey's capability to meet its own requirements of the defense industry, Demir told, "Turkey satisfies more than 50 percent of its requirement through domestic resources. It is too difficult to make a distinction between the numbers of domestic and foreign products. One of the top priorities of our defense industry's strategy is to guarantee that the products, which we need in the long run, are produced in Turkey."

Upon a question concerning the Infantry Rifle Project, Demir said, "Our infantry rifles have been distributed to our units to be tested. Soon after we receive positive feedback, we will commence mass production and distribute the rifles among our units to a large extent." Demir also expressed that exporting defense equipment was quite different from marketing any other product and continued, "The defense industry, in many aspects, gains strength with the government's support. In this respect, relations between countries and between statesmen may play an active role in exports. Some agreements or sales have to be made between states. As some countries demand that sales be made at the governmental level and we do not have a law that regulates sales between states, we are trying to enact a law to improve our legitimacy."

He also spoke of the tender that was lodged to procure long-range missile defense system and noted, "The Undersecretariat for Defense is continuing its talks [with China Precision Machinery Import-Export Corporation (CPMIEC), which is likely to supply the system to Turkey]." He further noted that only Russia was eliminated among the bidding countries and commented on whether Russia would be involved in the process once again. He stated, "This is not merely up to us, the counterparty's approach and response are also important. We have reached certain degrees with some issues but we and Russia have different habits. For the first time, we are holding talks with Russia on such a large-scale project as this; that is why it takes us much time to make progress. As well as other countries, Russia also knows or decisiveness about this tender. However, it is now out of the agenda due to its high tender offer."

Defense and Aerospace Exporters Association (SSI) head Latif Aral Aliş stated, "The sector's exports increase every year. The sector, which grows with research and development activities and technological investments, is now exporting one-third of its total production." Aliş noted that ASELSAN, a Turkish stateowned corporation that produces tactical military radios and defense electronic systems, and TUSAŞ, a center of technology in design, development, manufacturing, integration of aerospace systems, modernization and after sales support in Turkey, are among the world's largest defense companies and expectations about exports financing are fulfilled to a certain extent. He added, "A credit memorandum has been signed between the Undersecretariat for Defense Industries and Eximbank for receivers. In addition to this, we are expecting progress in the treasuryaided credits and country-specific loans to be granted to the defense industry."

Currently, Turkey is now the fourth largest light weapons exporter to the U.S. and this indicates the quality of our technology and the convenience of our prices. The defense industry's companies increased total exports to $1.4 billion in 2013, while it was $600 million in 2008. They achieved a 20 percent increase in the first quarter of 2014 compared to the same term last year."
Last Update: Sep 01, 2014 2:31 am
RELATED TOPICS