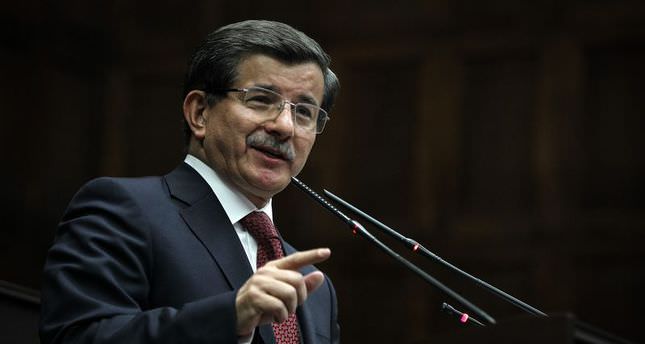 by Daily Sabah with AA Sep 02, 2014 12:00 am
The program of the Turkey's 62nd government, formed by Prime Minister Ahmet Davutoğlu, was read at the Parliament on Monday. The economy will be the next most important issue for the new Davutolğu government after democratization. The economic program has been prepared specifically to meet the Turkish central bank's inflation target, which remains at 5 percent, and aims to continue floating the exchange rate in the country.

The country's statistical authority says inflation in Turkey rose slightly last month, from 9.16 percent in June to 9.32 percent, mainly because of rising food prices.The main principles of the economic program consist of transparency, permanency, consistency, and foreseeable economic policies as the central bank will be independent in determining its policies aimed at price stability.

Turkey's former Prime Minister Recep Tayyip Erdoğan, now the current president, and other government officials in the recent past have criticized the central bank for maintaining high interest rates, terming it as a possible limiting factor for economic growth.Selecting the 100th anniversary of the Republic of Turkey as a target, the AK Party aims to increase the national income per capita to $25,000 and national income to $2 trillion by that time.

While the vision for 2023 is maintained in the 62nd government's program announced by Prime Minister Davutoğlu, it was stated that "new Turkey will grow with a new economy." The program emphasized the importance of a "strong economy" and anticipated $350 billion (TL 761.23 billion) worth of public investments over four years.

The program is based on development, welfare, financial discipline, value-added employment, giving young generations the abilities to perform R&D activities and directing increasing savings to necessary areas were listed as crucial areas. "The central bank of Turkey will continue to determine monetary policy and the tools of monetary policy it will apply in order to ensure price stability independently," read the statement. The government plans to extend its support to individual pension schemes and encourages the participation of state lenders such as Ziraat Bank and Vakıfbank in the scheme. The government's program aspires to complete the project of Istanbul becoming an international financial center, with the aim of putting the city's name on the list of the ten most important finance centers in the world by 2023.

The current account deficit will be specifically addressed by increasing the share of renewable energy sources and nuclear power plants. In 2014, the current account deficit is anticipated to shrink by 6 percent of Turkey's GNP. The government aims to shrink the unemployment rate to 5 percent through strengthening relations between education and employment and developing social welfare insurance. Figures by Turkey's statistics authority show that unemployment in Turkey fell to 8.8 percent in May - keeping a consistent downward rate for the fourth consecutive month.

Nuclear plants will be developed in Mersin and in Sinop and high capacity coal power plants will be completed in order to exploit the country's coal resources. According to the government program, air transport aims to have a 400-million passenger capacity through their fleet of 750 aircraft. Turkey's foreign trade deficit decreased for the seventh month in a row after the central bank's interest rate hikes in late January.