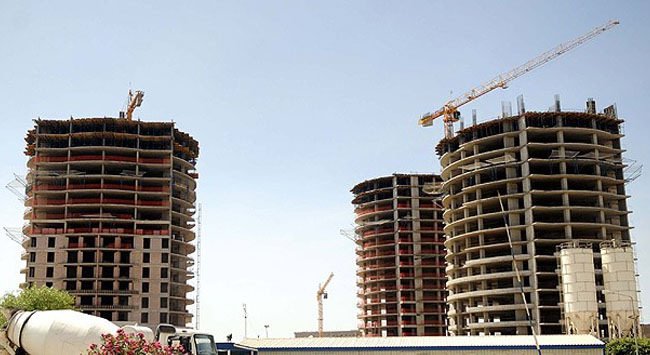 Overseas contracting services, which have rapidly grown in recent years through investments in risky areas that are close to Turkey, give negative signals in 2014 with the escalation of tension in the region

While the Islamic State of Iraq and al-Sham (ISIS) attacks in Iraq have cut Turkey's exports to Iraq in half, it has also started affecting the construction sector. The Turkish Contractors Association (TMB) announced that Turkish companies could only assume 22 projects this year in Iraq valued at approximately around $1 billion (TL 2.16 billion). There are 43 ongoing projects at the moment.

Speaking to Turkish Daily, Dünya, TMB also noted that many companies have suspended their projects. In accordance with the "loss list" of companies that run businesses in Iraq issued by the Ministry of Finance, many workers had to be laid off in 70 projects worth $4.5 billion of 43 companies. Only some projects in the Basra region can still continue.

According to TMB's statement, due to the recent clashes in Iraq, there is a high security threat in Mosul, Kirkuk, Salahaddin, Diyala, Anbar, Baghdad and Basra regions threatening the Turkish companies in the region.

According to Dünya, there was a series of risks highlighted at these meetings. It was decided one of the first precautions to be taken is ensuring that the discharge of the employees of contracting firms should be accepted by any Iraqi employers, whether they are public or private companies. In order to prevent any further problems, Iraq should be declared as a "high risk zone" and all works should be suspended in line with the announcements of the Turkish Ministry of Foreign Affairs. Based on this decision 43 Turkish companies now in Iraq have suspended their works.

It was also noted at the meetings that the discharges that started in Baghdad and South of Baghdad have now reached the north affecting the construction sites in Erbil and other regions. TMB authorities said, "Even though we don't have an exact number, we know that there are a few companies that continue their business."

In the meetings, contractors noted that letters of guarantee issued by banks for the projects in Iraq are dubious at the moment and this is worrying the companies. The Banking Regulation and Supervision Agency (BDDK) requested the TMB take precautions. TMB authorities noted that some banks have warned their customers that their credibility might suffer if they assume work in Iraq due to the risk they are assuming. "While there are no sanctions on private firms in terms of letters of guarantee; some banks apply higher 'risk premiums' rendering loan conditions harder to meet. Mainly the Foreign Affairs and Economy Ministries and all other related Turkish authorities should provide support to Turkish contracting firms in terms of letters of guarantee, progress payments, loss of machinery and equipment," said the authorities of TMB.

Again according to the information obtained by Dünya newspaper from TMB; Turkish companies have completed 825 projects worth more than $20.9 billion since 1975. TMB further said, "The competitive edge of Turkish firms is that they are aware of the conditions and requirements in the region thanks to their almost 40-year experience in the region and the strong relations they have built during this time. Turkish contractors know both the history and the structure of the region. They will continue to stay positive and take advantage of any possibilities that come up as much as the business cycle allows."
Last Update: Sep 03, 2014 11:12 pm
RELATED TOPICS