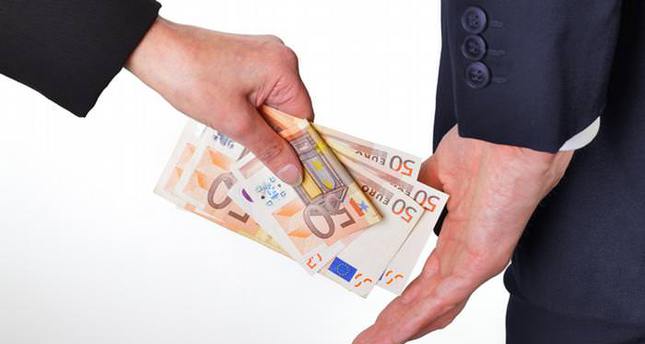 by Associated Press Sep 04, 2014 12:00 am
An estimated $1 trillion (TL 2.16 trillion) a year is being taken out of poor countries and millions of lives are lost because of corruption, according to campaigners. Anti-poverty organization ONE is urging leaders of the 20 largest economies to act decisively at an annual summit in November against money laundering, bribery, tax evasion and corruption which it estimates costs the world's poorest countries more than $1 trillion a year. The Washington, D.C.-based advocacy group launched its report on the economic cost of corruption on the developing world yesterday in the Australian capital Canberra at a Parliament House event attended by diplomats from the United States, Canada, Saudi Arabia and South Africa. ONE is lobbying Australia to use its presidency of the G20 leaders' summit in the city of Brisbane on Nov. 15-16 to end what it calls a culture of secrecy that allows corruption and criminality to thrive in many countries.

The report, The Trillion Dollar Scandal, estimates that as many as 3.6 million deaths could be prevented if money drained from the poorest economies by corruption was invested in health systems. "Developing countries are losing a trillion dollars every year as result of money laundering, bribery and tax evasion, and the uncomfortable truth is that often the policies put in place by G20 countries are facilitating those outflows from the world's poorest countries," report author David McNair said. McNair pointed to World Bank research that found 70 percent of major international financial scandals since 1980 involved shelf companies in which the owners were unknown. The British Virgin Islands and the U.S. state of Delaware were the most popular places for such companies to be registered. The report found that the losses could be significantly reduced if policies were put in place to increase transparency and combat corruption in four key areas: money laundering, a public register of principals of phantom firms in which ownership structures are hidden, public disclosure of company payments made in natural resource deals and an international exchange of tax information to combat tax evasion. McNair held meetings in Canberra this week with officials from Prime Minister Tony Abbott's office, Treasury Department and the Department of Foreign Affairs and Trade to seek support for the recommendations. Parliamentary Secretary to the Prime Minister Alan Tudge told the launch there was "alignment between the aspirations of the Australian government and the G20 on the one hand, and the call to action that you (ONE) have in your report, on the other."ONE used three methodologies to calculate the costs of secrecy and corruption to the poorest countries.