Future does not promise lower food prices in Turkey 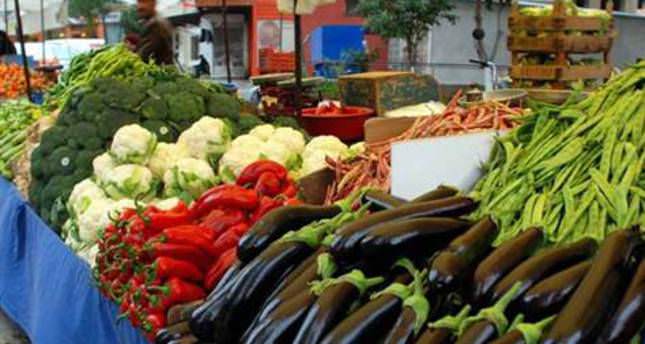 The hike in food prices is not a flash in the pan, but is expected to last into the mid to long-term period due to natural conditions, possible natural disasters and increasing global demand, an official report suggests

The price of food, which has been viewed as one of the main drivers behind untamed inflation by some economists and statesmen in Turkey for several months, is expected to increase further in the mid-long term, according to a report by the Tenth Development Food Products and the Food Safety Expertise Commission.Drought, increasing demand and climate change will lead to further hikes in food prices and inflation, says the official report.

Even though it is known that an appreciation in the U.S. dollar and the euro against the Turkish lira within the last six to seven months has caused a temporary inflationary effect, natural effects keep their weight on food prices. Furthermore, Turkey's Deputy Prime Minister Ali Babacan who is responsible for the economy blamed high food prices on the recent severe drought in the country on a TV show last Tuesday.

In the report it was stated that climate conditions, natural disasters, a change in demand in countries that have suffered economic crisis and those which are on the verge of economic recovery will determine the general progress of food prices. "Increasing money supply in the international markets also introduces the risk of speculative market influences," noted the report. It also highlighted the fact that this may cause price fluctuations in agriculture and food markets.

According to the Food and Agriculture Organization (FAO) of the United Nations and the Organization of Economic Cooperation and Development (OECD) reports, it is expected that the prices for cattle meat will increase by 20 percent within the next 10 years; raw and white sugar by 30 percent; wheat, corn and non-fat milk powder by 40 to 60 percent and butter; and oily seeds by 60 and vegetable oil by 80 percent.

The report also notes that foreign investments in the food and beverage sector in Turkey is increasing and according to the data published by the central bank, foreign capital enterprises are expanding their investments in Turkey. The report read, "while there were 208 foreign firms investing in Turkey's food and beverage sector between 1954 and 2004, the number of international investments increased to over 300 between 2005 and 2011; 10 percent of these investing in the food and beverage sector of Turkey." The foreign capital enterprises are mostly from European Union countries with the largest concentration in Germany, the Netherlands, France and Italy. It was said in the report that Turkey attracts foreign investors as it is close to the Turkish Republican and Middle Eastern markets, which are rich in natural resources and are expected to flourish further.

The report stated "An increase in technology transfer and R&D activities are important as it contributes to the rise of added value. It is expected that food security and an understanding of competition will develop further in the EU and the globalization process. The understanding of competition should be improved by protecting the country's natural resources. It is also thought that foreign-capitalized companies may be influential on disciplining ethical approaches and informality in the sector. If domestic capital grows and rich agricultural resources are introduced to world markets through new brands, this will increase contributions to our country."

Turkey's Economy Coordination Council (ECC), which is formed by the minister working on economy, put inflation and food prices on the agenda in its first meeting last week. As Turkish newspaper Sabah reported, the council will fight against middlemen who cause increases in food prices by speculating.

On the other hand, the world's most developed economies spent less on agricultural aid last year, the Organization for Economic Co-operation and Development revealed Thursday. The organization, comprised of 34 of the world's leading economies, called on governments to focus on improving agricultural productivity and sustainability, in its annual report on agricultural policy. "High prices and high incomes in the farm sector have created the right conditions for deeper reform of agricultural policies, and much more needs to be done beyond fine-tuning," said OECD Secretary-General Angel Gurria.

The report said that support for producers had slipped by more than $8 billion (TL 17.26 billion) and noted that Australia, Chile and New Zealand only provide funds for safety measures, disaster relief and R&D. "More market intervention mechanisms should be dismantled in favor of support that is less connected to production and more targeted to specific needs, in line with stated policy priorities of increasing productivity and sustainability," the report said. The organization's report highlights the major differences among OECD countries in the level and composition of support they provide to the agricultural industry.