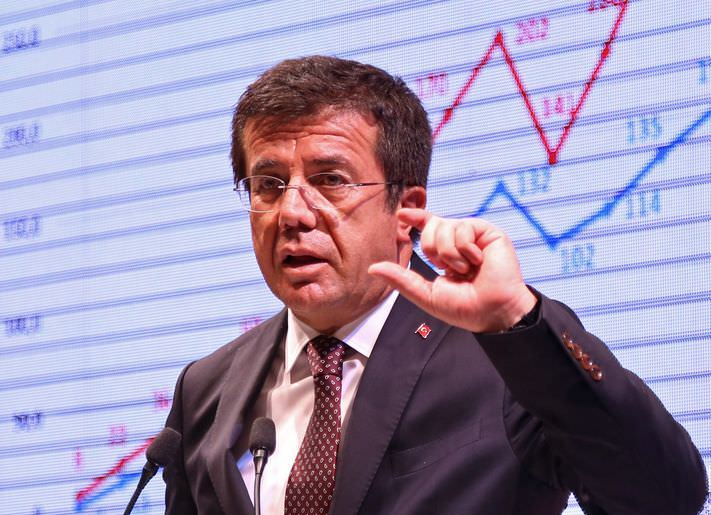 by Daily Sabah Sep 07, 2014 12:00 am
The mandate of the Turkish Central Bank will be expanded from the current focus on inflation and include economic growth, fiscal priorities and unemployment, said Economy Minister Nihat Zeybekçi.

Speaking to the press, Economy Minister Zeybekçi said that limiting credit access by increasing borrowing costs could only restrain inflation for a short term, but it would reduce investments in the manufacturing industry.

Zeybekçi stated that they spoke with the authorities to enlarge the authority realm of the central bank and create employment besides emphasizing price stability. He said, "If the central bank cannot enliven the economy by increasing production and employment as well as bring price stability, a legal regulation is needed to achieve this. Turkey should be able to do this without any trouble."

In addition to saying that Turkish firms pay loan shark interests, Zeybekçi noted, "Decisions of the bank should not be taken by considering current inflation. Rather, 'the 12-year period expected inflation rate,' which is around 7.35 percent according to a central bank survey, should be taken into consideration."

Reminding that average commercial credits in Turkish lira decreased from 15.8 percent in March to 12.7 percent in August, Zeybekçi stated that banks increased their fees and costs by up to 14 percent for industrialists. He also added that low interest rates would help bring inflation under control.Emphasizing that high financial costs force manufacturers to keep production low, Zeybekçi said that manufacturers have to increase their production in times of growing demand, and this pushes up consumer prices more.

He noted that absolute interest targeting could be misleading, and the first policy instrument coming to mind to slow down inflation was to increase interest rates so as to repress demand.Zeybekçi pointed out that Turkish industrialists could be more competitive with 2.15 and 2.25 exchange rates, which could help control excessive imports.

Zeybekçi stated that the only duty of the central bank should not be inflation targeting and price stability, adding that things that threaten the benefits of the Turkish economy, such as high interest rates, would not be sustainable.

Speaking to Daily Sabah on the matter, Dr. Dündar Demiröz, an economist and academic at Istanbul University, said that according to the Constitution, the president is responsible for fostering cooperation and collaboration between public institutions. "When we view Erdoğan's presidency from this aspect, he is expected to coordinate the work of public institutions that have to do with economics. It is known that Erdoğan is at odds with the central bank's law and its working principles, which occasionally contradicts the government's fiscal policies. The central bank law says the bank is only responsible for price stability, which is quite unacceptable for a holistic economic view," Demiröz noted.