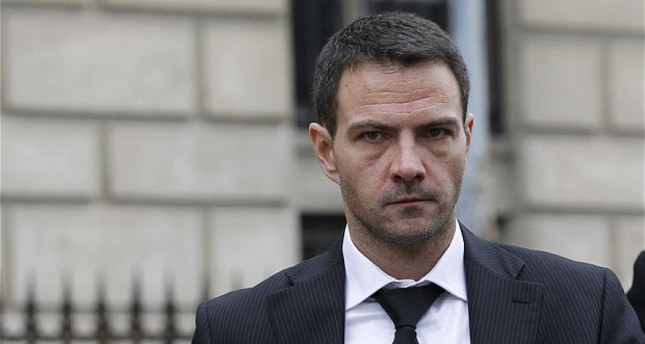 by Sep 08, 2014 12:00 am
Jerome Kerviel, the French rogue trader who brought one of Europe's biggest banks to the verge of ruin with nearly 5 billion euros (TL 13 billion) in losses, left prison yesterday after winning conditional release. Under the terms of his release, Kerviel, 37, will be obliged to wear an electronic tagging bracelet at all times and stay at home every workday evening.

He left Fleury Merogis prison, south of Paris, after less than five months following his high-profile conviction and imprisonment for breach of trust, forgery and entering false data. "I am super happy to leave today ... I want to rebuild my life. I want to have a normal life with my loved ones, start a family and finally be able to enjoy life," Kerviel told reporters as he left prison. He said he "couldn't wait to phone" his mother, who he said had broken down when the prosecutor launched an appeal against his conditional release. He also paid tribute to the prison staff during his isolation in prison and said his time spent behind bars had been in some ways "enriching" and had changed his view of the penal system. "I am super happy to leave today. It will be easier - for me of course and for my loved ones - and easier to work on the case, to continue this fight," the ex-trader said. Wearing an electronic bracelet is "always better than being shut up" in a nine-metre square cell, said the ex-trader, unshaven and wearing a white T-shirt under a black pullover. "Today is a day of immense joy for us. Immense joy," said Kerviel's lawyer David Koubbi, who told reporters the "fight" against Kerviel's former employer Societe Generale would continue. "It's true that an electronic bracelet is a constraint but it's not the same constraint as being here," he said. Kerviel brought banking giant Societe Generale to its knees in 2008 with wildly risky trades of up to 50 billion euros ($66 billion; TL 140 billion) on derivatives - betting on the market direction. Kerviel became something of a cause celebre in France and overseas with many saying he had been set up as a scapegoat for the failings of the wider financial system. The trader himself said he was ashamed of his former profession and embarked on a twomonth trek through Italy to protest the "tyranny of the markets," even winning an audience with Pope Francis.

Kerviel will have to wear the bracelet until June 26 next year and his movements are restricted. He must be at home between 8:30pm and 07:00am between Monday to Friday. His lawyer has previously said that Kerviel had secured a job at an IT consultancy firm and hoped to resume "a completely normal life." Kerviel never denied making huge gambles. "My daily existence was about making money for the bank. That was my only objective, at any price, regardless of all moral or ethical considerations," he said before he was imprisoned.

Despite dealing in such vast sums of money, he was on a relatively modest 50,000-euro basic salary when the scandal erupted in January 2008. He lived in an unremarkable, small suburban flat and took the train to Brittany in the holidays to visit his widowed mother. "I am an ordinary person. I'm not crazy," he said during investigations into the scandal. "I didn't earn millions (in salary) and I didn't drive a Porsche."