Economy should be at top of agenda 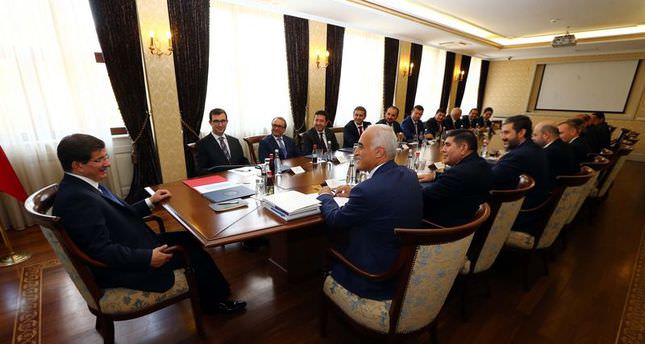 by Daily Sabah Sep 10, 2014 12:00 am
Top businessmen from the Independent Industrialists and Businessmen's Association (MÜSIAD), which is one of the leading businessmen foundations in Turkey, visited Turkey's newly elected Prime Minister Ahmet Davutoglu on Tuesday. During the meeting businessmen conveyed their expectations of the new government.

Nail Olpak, chairman of MÜSIAD, requested that the new government focus its energy on economic policies that prioritize production and employment. "We think that the economic agenda should be sterilized to prevent vicious cycles of interest rates, the stock market and currency," Olpak noted.

Highlighting the importance of a new constitution, Olpak noted that Turkey should finalize its work on the new constitution by the time of the Parliamentary elections in 2015.

He also remarked that to become a developed society, Turkey needs a governmental system that works quickly and justly.

During the meeting, Olpak touched on the ongoing reconciliation process between the government and Kurds, which covers social, judicial and economic regulations to terminate the decades-long conflict in the country's southeast. "We believe that the reconciliation process should be carried out with no hesitation.

The process will bring peace, stability and prosperity to the region, not to mention saving lives, which is more important than anything," Olpak said.