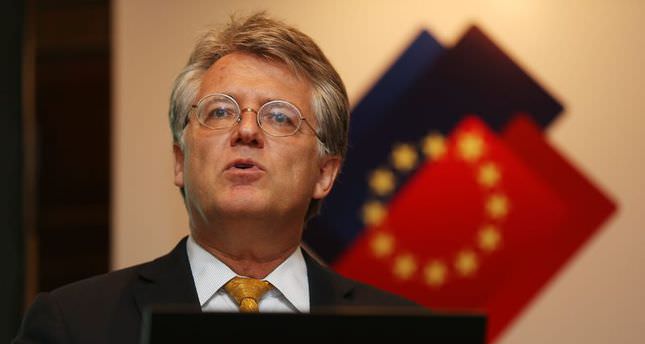 by Anadolu Agency Sep 10, 2014 12:00 am
The biggest European business group in China says Beijing needs to speed up economic reform and curb the dominance of state companies or risk facing an economic slowdown and a possible crisis. The European Union Chamber of Commerce in China said yesterday communist leaders need to make good on a reform agenda issued in late 2013 that promises to open more of the state-dominated economy to private and foreign competition. The call comes amid concern Beijing is using anti-monopoly investigations to hamper foreign companies.

The chamber's president, Joerg Wuttke, said that with economic growth slowing, China "needs a whole new era of reform."The group, which represents 1,800 companies, said it needed changes include opening industries to competition, making regulation clearer and more predictable and reducing privileges for state companies. The Communist Party announced a blueprint for far-reaching reform at the end of a key meeting in November known as the "Third Plenum." It called for allowing market forces to play a "decisive role" in resource allocation, a bigger function for private capital and further financial and currency reforms.

But it also said the dominant role of stateowned enterprises (SOEs) was the "foundation of the socialist market economy," raising questions about competitive fairness. The Third Plenum document was generally well-received, although economists and business executives have warned that its implementation would need to be closely watched. The EU Chamber expressed doubts over how committed authorities are to the "decisive role" pledge as to whether foreign industry can ever achieve equal treatment with Chinese counterparts and concerns over the position of SOEs. "The problem we have is that the implementation is not clear yet," said Joerg Wuttke. "We have seen very few steps in the financial sector where the reforms actually have taken place, hence, the members clearly see a sense of urgency," he