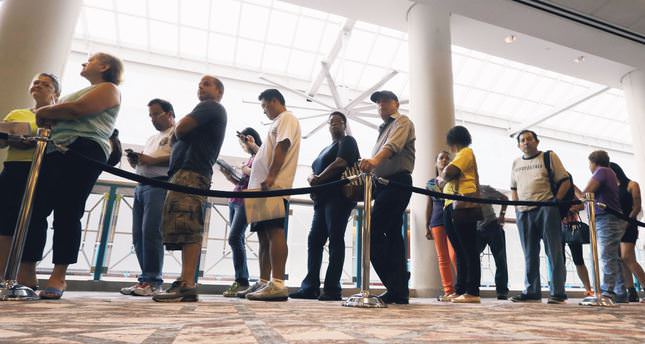 While Turkey's unemployment has fallen to 8.8 percent in May, the World Bank said an extra 600 million jobs needed to be created worldwide by 2030 just to cope with the expanding population

The world is facing a global jobs crisis that is hurting the chances of reigniting economic growth and there is no magic bullet to solve the problem, the World Bank warned yesterday. In a study released at a G20 Labour and Employment Ministerial Meeting in Australia, the bank said an extra 600 million jobs needed to be created worldwide by 2030 just to cope with the expanding population. "There's little doubt there is a global jobs crisis," said the World Bank's senior director for jobs, Nigel Twose. "As this report makes clear, there is a shortage of jobs - and quality jobs. "And equally disturbingly, we're also seeing wage and income inequality widening within many G20 countries, although progress has been made in a few emerging economies, like Brazil and South Africa." He said that overall emerging market economies had done better than advanced G20 countries in job creation, driven primarily by countries such as China and Brazil, but the outlook was bleak. "Current projections are dim. Challenging times loom large," said Twose. The report, compiled with the OECD and International Labour Organisation, said more than 100 million people were unemployed in G20 economies and 447 million were considered "working poor," living on less than $2 (TL 4.34) a day. It said despite a modest economic recovery in 2013-14, global growth was expected to remain below trend with downside risks in the foreseeable future, while weak labor markets were constraining consumption and investment. The persistent slow growth would continue to dampen employment prospects, it said, and warned that real wages had stagnated across many advanced G20 nations and even fallen in some.

"There is no magic bullet to solve this jobs crisis, in emerging markets or advanced economies," said Twose. "We do know we need to create an extra 600 million jobs worldwide by the year 2030 just to cope with the expanding population. That requires not just the leadership of ministries of labor but their active collaboration with all other ministries - a whole of government approach cutting across different ministries, and of course the direct and sustained involvement of the private sector."In the face of below trend growth, the Group of 20 leaders, who will meet in Brisbane in November, have called for each member country to develop growth strategies and employment action plans. They emphasized the need for coordinated and integrated public policies, along with resilient social protection systems, sustainable public finance and wellregulated financial systems. "Coordinated policies in these areas are seen as the foundation for sustainable, job-creating economic growth," the report said. Earlier this year, G20 finance ministers and central bank governors meeting in Sydney agreed to work towards lifting their collective gross domestic product by more than two percentage points over the next five years. However, an IMF report in July warned that the pledge could be wiped out by rising interest rates and weakening emerging economies. After seeing 9.7 percent in March, Turkey's unemployment rate fell significantly to 8.8 percent in May, a 0.2 percent decrease compared to the previous month according to Turkey's statistical institute TurkStat. According to data, slightly more than 48,000 new jobs were created in May and the number of unemployed, aged 15 and more, decreased to 2,551,000. The EU, which Turkey is negotiating to join, has been registering significantly higher unemployment rates since the 2007 financial crisis. The male unemployment rate in May was 8 percent while the female unemployment rate was 10.5 percent. In the same period, the youth unemployment rate, between the ages of 15 and 24, was calculated at 15.8 percent. Greece ranked first with a 27.3 percent unemployment rate among the EU countries. Spain and Croatia have the second and third highest unemployment rates in the EU, respectively 24.7 percent and 16.6 percent.