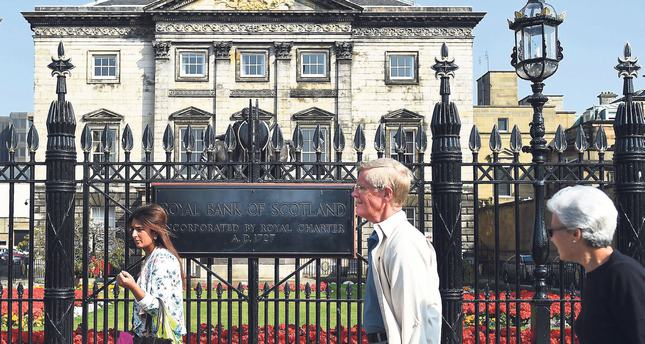 Two major British banks said they would relocate to London if Scotland votes for independence, hours after a poll showed a slender lead to those who want to keep the centuries-old union with England

Britain's political elite have rushed to respond to the prospect of Scottish voters backing secession in a referendum on Sept. 18 after a poll at the weekend showed the 'yes' campaign's first lead this year. Leaders of Britain's three main political parties scrambled to the country on Wednesday where they said Scotland would gain more autonomy if it rejected independence.

Part-nationalised British banks Lloyds and RBS both said they would relocate to London if Scots decide to end the 307-year long union with England. Lloyds, which is 25 percent-owned by the British government and controls Bank of Scotland, said its contingency plans included setting up "legal entities in England." RBS said it "would be necessary to re-domicile the bank's holding company." Bank of England Governor Mark Carney also raised questions about currency arrangements in an independent Scotland on Wednesday, saying the country would need big stockpiles of sterling if it adopted the pound without an agreement with the rest of the United Kingdom. This could threaten the spending promises of Scottish National Party leader Alex Salmond who wants a deal to share the pound and the BoE with the rest of the UK but Britain's main political parties have ruled that out.

There was some relief for unionists when a poll released on Wednesday evening showed 53 percent of Scots would vote against a split, with 47 percent intending to opt for independence - unchanged from its last survey on Aug. 28. The figures from the poll, carried out by Survation for the Daily Record newspaper, excluded 10 percent of voters who said they were still undecided.

Until a few weeks ago the "No" campaign had been comfortably ahead, according to a range of polling companies. Financial markets are on edge about the prospect of Scotland breaking away, probably taking much of the North Sea oil and gas reserves with it and raising questions about Britain's balance of political power and its membership of the European Union in the future.The cost of hedging against sharp swings in the British pound ahead of the Scottish referendum in a week's time jumped to 13-month highs.

Thursday marks the anniversary of the 1997 referendum in which Scots voted for their current devolved administration with Salmond, who leads the pro independence movement, due to speak at a major news conference. His campaign was, however, dealt a setback after the influential Scottish newspaper The Scotsman said on Thursday it had decided to back remaining part of Britain. "The conclusion is that we are better together, that Scotland's best interests lie not in creating division but in continuing in the Union and using its strengths to help us continue in our success," the newspaper said.