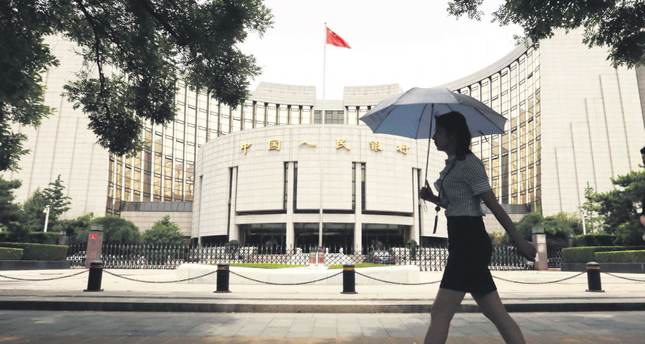 A reported $81 billion injection into China's major banks is probably the first of a series of fresh stimulus measures by Beijing to bolster its flagging economy, the world's second largest, analysts said Wednesday

Online portal Sina late Tuesday quoted financial institutions as saying the People's Bank of China (PBoC), the central bank, would channel 500 billion yuan ($81 billion) into the country's five biggest banks, all state-owned. The PBoC has not confirmed the move. "We believe Beijing (is) to introduce a slew of other easing and stimulus measures in coming weeks to re-boost confidence and re-stabilize growth," said Bank of America Merrill Lynch China economist Lu Ting.

US stocks earlier reacted to the report on Tuesday with the Dow Jones Industrial Average rising 0.59 percent to 17,131.97 points and the broad-based S&P 500 up 0.75 percent at 1,998.98. The Industrial and Commercial Bank of China, Bank of China, China Construction Bank, Agricultural Bank of China and Bank of Communications will receive the funds in equal amounts over three months through the central bank's so-called Standing Lending Facility, a tool it uses to manage short-term liquidity, Sina and analysts said. The report follows a string of weak data for August, including a five-year low for industrial output growth and a surprise drop in imports, which have put in peril the government's target of 7.5 percent annual economic expansion for this year. "Such a move highlights the fact that China's policymakers are sensitive to the significant weakening seen in the August activity data, and the move would be in line with our call that monetary policy will be eased further to boost the economy," Nomura said in a research note.

China's gross domestic product grew 7.5 percent year-on-year in the second quarter this year, improving from 7.4 percent in the first quarter, which was the worst since a similar 7.4 percent result in July-September 2012. But some analysts played down the impact of the anticipated move. "The impact of such a move on boosting corporate investment and supporting real economic growth will be relatively limited in our view, as the property downturn continues to worsen, excess capacity accumulates and business outlook remains weak," said Wang Tao, head of China economic research at investment bank UBS. Analysts said the scale of the injection was equivalent to around a 0.50 percentage point cut in the reserve requirements for banks, the amount of funds they are required to set aside. "We expect monetary conditions to loosen modestly, which will provide some much-needed support for demand growth," Goldman Sachs said in a research note.

Although further measures are anticipated, analysts said, some rejected the possibility of China cutting reserve requirements across the board or slashing interest rates. China's central bank set up the Standing Lending Facility in 2013 to meet liquidity demands from banks, typically from a oneto three-month period, using it in both June and September last year, as well as in January. The PBoC only reports use of the lending facility on a quarterly basis.
Last Update: Sep 18, 2014 9:47 am
RELATED TOPICS