Erdoğan: Economy steady as a rock amid black propaganda 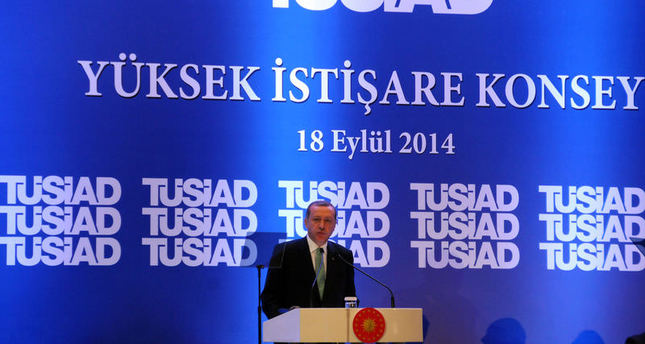 Despite claims to the contrary by biased individuals and institutions, Turkey's economy remains healthy after a decade of growth, said the president, promising to ensure Turkey reaches its 2023 objectives

President Recep Tayyip Erdoğan on Thursday attended the High Advisory Board meeting of Turkish Industrialists' and Businessmen's Association (TÜSİAD), where he addressed the prominent members of Turkish business and briefed them on Turkey's economic outlook. In his speech, Erdoğan highlighted the importance of economic development for the governments he led from 2002 to 2014. Recalling the devastating economic crisis in 2001, Erdoğan stated that decades of political instability and uncertainties were the main drivers behind the crisis, which caused the Turkish lira to decrease in value by 50 percent and gross domestic product to shrink by 6 percent. Erdoğan further said that the governments that ruled the country after a huge crisis created economic policies that aimed to recover the economy and spread wealth to each individual within the society.

The president also said that Turkey's GDP grew by 5 percent on average between 2003 and 2013, whereby every layer of the public has benefited.
In his speech, Erdoğan touched upon the turbulent period that the Turkish economy passed through in 2013 due to the domestic uprising and the Dec. 17. coup attempt that is believed to have been orchestrated by the followers of U.S.- based imam Fethullah Gülen.

Speaking out against the ongoing black propaganda against the Turkish economy, Erdoğan slammed a Turkish bank's CEO who harshly criticized Turkey's recent economic and political outlook, and claimed that Turkey has started to loose its gains. "The bank's assets rose eightfold and total deposits rose six-fold in 12 years. I, as a president, would interfere if there was a regression in the economy. The bank drastically increased its profit. They should not complain ab out the economy," the president said.

During his address to the business circle, Erdoğan touched upon the recent debate on credit rating agencies' malevolent view on the Turkish economy. The president recalled that credit rating agencies increased the rating of a neighboring countr y to Turkey [Greece] disregarding their collapsed fiscal situation. "European countries gave 200 billion euros to bail out that country, but still the countr y is in a bad position. On the other hand, Turkey is a country that maintains its growing pace. But the agencies have made negative statements. That is unacceptable," Erdoğan said.

Erdoğan also noted that credit rating agencies' views towards Turkey is not only the government's problem, but should concern the whole public. "Standard and Poor's made malevolent evaluations on the Turkish economy's lack of technical and economic analysis. Now the other agencies have piled on," Erdoğan said.

Echoing Organization for Economic Cooperation and Development (OECD) S ecretary-General sentiments that what credit rating agencies said are less important than OECD's evaluations, Erdoğan said, "We stood firm against all kinds of [negative] perception operations, smear campaigns and coup attempts, and we will continue to do so." Erdoğan added that the one who damaged its reputation is not Turkey, but the credit rating agencies belonging to certain media outlets.

Erdoğan said that Turkey has broken many records as well as new ground within the last 12 years, and that this success will continue in the future. "We should not focus on polarization and tensions. As the new President, we will improve the Kurdish Peace Process, completely get rid of the Gülen Movement and strengthen the economy on the way to 2023. The national income, which was suffering when we took over, as well as the foreign exchange reser ves of the Central Bank of Turkey has increased so much throughout our term. And we will never lose faith. We will continue striving to reach all our targets set for 2023."

Speaking on the turmoil in the Middle East, Erdoğan said the business world should not be discouraged by the crisis in the region. President Erdoğan said that Turkey should not spend its efforts on polarization, but it should aim for a strong Turkey, and added, "It is not the time to show fists, it is time to shake hands and aim for "New Turkey's" vision."

TÜSİAD's chairman Haluk Dinçer made a speech at the meeting, and stressed that TÜSİAD tries to maintain close relations and exchange ideas with the government regardless of party affiliation - referring to tense relations among some influential TÜSİAD members and the AK Party government. Dinçer stressed the need for an advanced global cooperation model to achieve global stability and overcome existing problems of the global financial crisis of 2007.

According to Chairman Dinçer, the new era of globalization centers on basic rights and freedoms, liberal governments and civilian organization of societies and individuals, where current political turmoil is attached to this need for change rather than sectarian, national or financial conflicts. Macroeconomic stability is the most important success of the last ten years, Dinçer said, and latest rumors regarding Turkey's banking sector should effectively be resolved.
Last Update: Sep 19, 2014 9:22 am
RELATED TOPICS