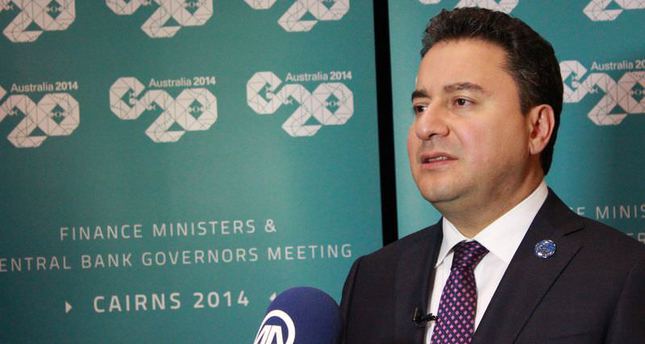 by Daily Sabah with AA Sep 21, 2014 12:00 am
Deputy Prime Minister Ali Babacan, speaking at the "G20 Finance Ministers and Central Bank Governors Meeting" in Cairns, Australia over the weekend, stated that central banks' expansionary or contractionary monetary policies are not enough to improve a country's economy. He said that the government's priority would be structural reforms to boost economic growth. Babacan, who is in charge of the country's economic policies, stated that during the meetings, delegations from other countries asked him to explain Turkey's growth strategies and financial policies to counter the instability in the international markets.

"The macro precautions in Turkey were highly affective. Maybe we are the only country in the world that applies these measures in the most extensive manner. They want us to share our experiences in this respect and we will announce our opinions on finance sector regulations in this meeting," said Babacan. He further noted that they will take over the presidency of the G20 from Australia as of Dec. 1 and will act as the president for the next 12 months. Babacan said that they will work on the matters that have been handled firstly by Russia and then Australia and focus on applying the decisions taken in addition to a few new matters yet to be taken into consideration.

Babacan further stated that the new stance of the European Central Bank is highly important for Turkey, which is highly integrated with Europe at the moment. "The most effective economic strategies are the internal structural reforms and the steps taken to resolve structural problems.
Therefore, we will closely observe the steps taken by the foreign central banks but we will also do our homework, which has been announced in our development plan," said Babacan. He further stated that they will be working on conversion programs, that they have more than 200 action plans and will announce the schedules soon as well. "With the implementation of these action plans, concrete steps will be taken to resolve the economic problems and in this manner, we will be able to implement the structural reforms and reach our high growth target,"Babacan said.

Turkey will create a bridge between the world's most and least developed countries during its G20 presidency, Babacan said on Saturday. Speaking to reporters, Babacan said, "When there was the G7 in the past, and when many decisions were being taken on that platform, Turkey experienced that feeling of exclusion. Now we do not want to make the countries excluded from the G20 to experience that feeling." Turkey will take over the rotating G20 presidency from Australia on Dec. 1 for a period of 12 months. "We aim to make the G20 reach out and take care of countries that are not G20 members in an inclusive way," said Babacan, the most senior voice on the Turkish economy. He also said that supporting small- and medium- sized enterprises will be one of the main focuses under Turkey's G20 presidency.