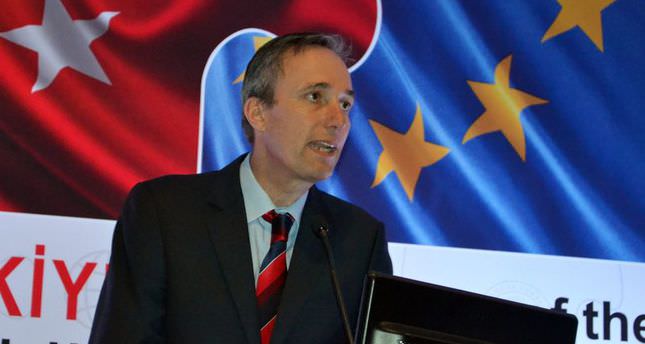 by AA Sep 24, 2014 12:00 am
World Bank Turkey Director Martin Raiser on Tuesday addressed design flaws in the EU-Turkey Customs Union agreement that is seen as the biggest obstacle for Turkey in EU economic integration.

Raiser said that although Turkey is a candidate for EU membership, its inability to participate in the decision-making process on the EU's Customs Union policies increases the risk of Turkish non-compliance with EU legislation.

The free trade agreement between the EU and third parties enables these non-EU countries' goods to enter European markets or Turkish markets via Europe without duty charges, but Turkey's exports to non-EU countries do not benefit from the same tariff reductions granted to the European Union. As a result, Turkey still has to face high tariffs and nontariff barriers.

Raiser noted that the EU had concluded many free trade agreements (FTAs) with countries such as Egypt, South Africa and Algeria, which refuse to conclude FTAs with Turkey. And this is the biggest problem facing Turkey in the Customs Union.

Raiser was speaking at the "Turkey-EU Custom Union" panel held by the European Union and the Ankara-based think tank Global Research Association, which conducts research into Turkey's harmonization with EU principles and policies.

"While the first best solution would be move forward with accession negotiations, other practical steps could be taken in the meantime to reduce the impacts of asymmetries, such as establishing working groups," he said.

"Consequently, Turkish firms have not received automatic reciprocal access to those markets, while imports from these countries can often enter Turkey duty free by way of trade deflection via the EU," Raiser said, stressing the proliferation of the EU's FTAs with larger countries such as the U.S. and Canada constitutes vital risks for Turkey.

"Well-managed parallel-track negotiations mirroring the main EU negotiations that aim to start and conclude at the same time could help resolve the problem," he said.

Turkey has been voicing its concern over the FTAs signed by the EU, especially the Transatlantic Trade and Investment Partnership between the EU and the U.S., said Raiser.

Turkish Economy Minister, Nihat Zeybekçi has repeatedly said that if the EU signs a free trade agreement with major economies, such as the United States, Canada or India, it would greatly harm the Turkish economy.