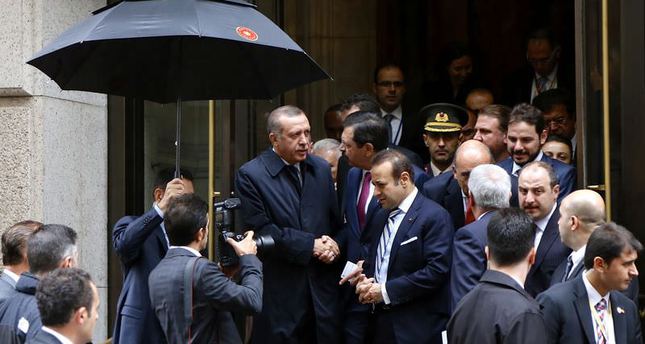 by Daily Sabah Sep 26, 2014 12:00 am
The joint meeting that was organized by the Union of Chambers and Commodity Exchanges of Turkey (TOBB), the U.S. Chamber of Commerce and the Investment Promotion Agency (IPA) brought together President Recep Tayyip Erdoğan and leading American businessmen in New York.

Delivering a speech at the meeting, TOBB President Rifat Hisarcıklıoğlu stated that Turkey is willing to further improve its commercial ties with the U.S., adding, "The inclusion of Turkey in the Trans-Atlantic Trade and Investment Partnership (TTIP) or another free trade agreement to be signed with the U.S. would be a concrete step taken to promote trade relations between the two countries."

Hisarcıklıoğlu emphasized that they do not even want to think of the probability that Turkey is excluded from this great economic integration, which would deeply influence the world economy. Touching upon the fact that Turkey's 2023 vision offers quite a wide sphere of cooperation for investors, Hisarcıklıoğlu continued: "Turkey wants to manufacture hi-tech products. As TOBB, we have been endeavoring for a long time to consolidate economic ties between Turkey and the U.S. We are aware that businessmen with their economic activities are the backbone of Turkish-American relations."