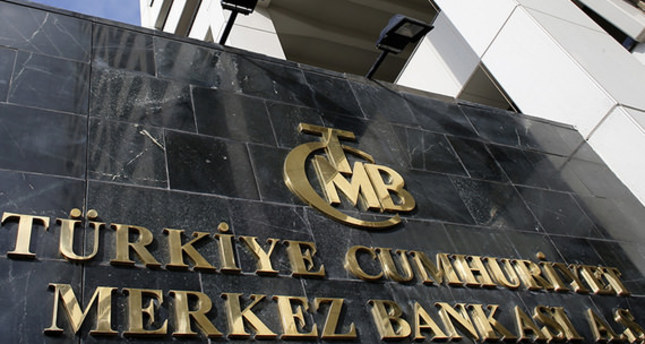 by Daily Sabah with Agencies Sep 26, 2014 12:00 am
Turkey's central bank on Thursday left interest rates unchanged as it keeps a watchful eye on inflation, although the government still expects the bank to make a sharp cut soon. The bank said in a statement after its latest monetary policy meeting that the one-week repurchase rate would remain at 8.25 percent and the marginal funding rate at 11.25 percent. In January, the bank, which acts independently from the government, had aggressively raised key rates in a bid to stop a steep drop in the value of the Lira. Concerned about weakening growth, the government has stressed the need for cuts to bring rates back to their pre-January levels. The bank responded by lightly trimming rates - but not as aggressively as the government had hoped. At its last meeting in August, it pruned other rates but kept the one-week repurchase rate unchanged. The Turkish economy sharply slowed to 2.1 percent growth year-on-year in the second quarter - compared to the first quarter annualized 4.3 percent growth figure - due to external shocks and decreasing domestic demand, partly because of the rate hikes to shore up the lira. President Recep Tayyip Erdoğan has repeatedly called on the bank to make an sharp rate cut to stimulate growth. According to analysts, inflation in Turkey stems from the high production costs that are boosted by high interest rates, while the central bank sees the inflation as a reason to keep the interest rates high.