EU to continue trade talks with US, celebrates deal with Canada 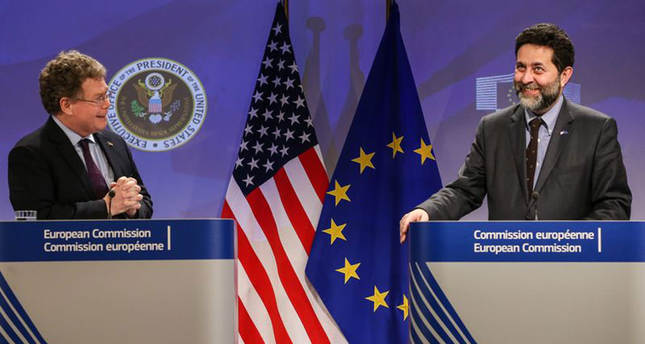 by Sep 28, 2014 12:00 am
European Union negotiators will enter their seventh round of free trade talks with the United States on Monday in Washington with the wind at their backs.

On Friday, leaders of the EU and Canada celebrated in Ottawa the conclusion of five years of negotiations on a separate free trade deal.

That deal - called the Comprehensive Economic and Free Trade Agreement (CETA) - still must be approved by respective Canadian and EU parliaments and jump through various legal and political hoops.

But as one of the most far-reaching trade deals in both Canadian and EU history, CETA is seen as a model for the EU-US free trade agreement.

It also provides a reality check about how long it will take for the US-EU Transatlantic Trade and Investment Partnership (TTIP) to be completed.

Launched in July 2013, officials had hoped to have sealed an agreement by late 2014 or early 2015, but a senior EU official has said hopes now focus on early 2016, several months before the US presidential elections.

The landmark free trade pact would create the world's largest free-trade area with the goal of spurring growth and jobs.

But even if the deal is tied up under Barack Obama's US presidency, it still must clear the hurdles of passage by the US Congress and EU legislature.

One of the biggest hurdles is a mechanism to settle disputes between foreign investors and national governments, which consumer groups fear could be abused by corporations.

The EU has put the so-called investor-state dispute settlement clause on hold until the eighth round of talks in November while it carries out a public consultation launched early this year. As of July, nearly 150,000 responses had been submitted, according to the EU's chief negotiator Ignacio Garcia Bercero.

Just this week, the EU-Canada trade deal hit a bump on the same issue. Germany blew the whistle on the idea that non-state courts could rule on such disputes, demanding that the clause be removed from CETA.

Earlier this month, European Commissioner for Trade Karel de Gucht - who is not involved in the day-to-day negotiations - came to Washington to personally press his US counterpart Michael Froman about another issue: energy.

DeGucht said that TTIP urgently needs a separate section on energy, adding: "I cannot imagine there would be a TTIP without an energy chapter."

On the one hand, energy-starved Europe would like unlimited access to US energy and raw materials, while most exports of US energy require approval from the Department of Energy - unless stated otherwise in foreign agreements.

On the other hand, energy has been a hot topic in earlier rounds of TTIP talks. The controversial method known as fracking to recover natural gas - added to worries about carbon emissions - have prodded concern in Europe that the new technology could be exported there.

In August, Italy, which currently holds the EU's rotating chair, started pushing for the EU to declassify confidential papers on the negotiations to increase transparency.

To add to the headaches, Obama has been unable to convince both his own Democratic Party and opposition Republicans to renew so-called fast track authority on trade agreements.

Fast-track authority allows trade treaties to be submitted without amendment for passage or rejection by simple majority vote from both the Senate and the lower House of Representatives.

Without that provision, individual legislators can raise objections to the minutae of a comprehensive deal, dismantling it piece by piece, making it difficult for Washington to close not only the EU trade deal but also a separate trade regime it is pursuing with the Asia-Pacific region.

The EU and US already have the world's largest trade relationship and some of the lowest tariffs, making up at least 40 per cent of global economic output.

TTIP would boost that trade even more, by smoothing the way for common regulations and rules, for example, on safety standards for cars.

The chief US negotiator, Dan Mullaney, has said that completing the pact "will require a lot of creativity and a lot of persistence."