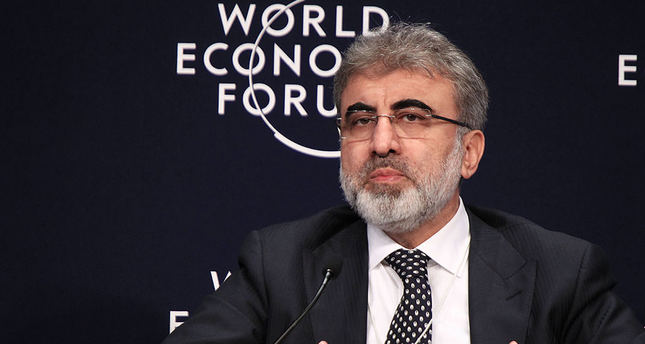 by AA Sep 29, 2014 12:00 am
Russia will continue with its $22 billion nuclear energy investment in Turkey, and both countries will strengthen economic cooperation despite their differences in outlook regarding regional political issues, said Turkey's Energy Minister Taner Yıldız on Monday.

Speaking at the World Economic Forum's Special Meeting entitled "Unlocking Resources for Regional Development" at the Hilton Hotel in Istanbul; Taner Yıldız said he will visit Moscow on Wednesday to discuss Russia's economic investments in Turkey.

Yıldız said that despite Turkey and Russia's different outlooks on the political crises in the Middle East such as with Syria, their mutual interdependency takes priority, and he stressed this point with Russia's $22 billion investment in Turkey including nuclear power plants.

The Akkuyu Nuclear Power Plant project is estimated to cost around $20 billion and total of $3.5 billion worth of equipment is expected to be used in the construction process, of which $1.8 billion will be spent this year alone.

Funds received from Russia are expected to be used specifically in the building of the infrastructure for the plant, in constructing roads, power lines, water pipelines, temporary housing and cranes.

Yıldız also said that despite the political instability in the Middle East, the conflicts will not prevent Turkey becoming an energy hub in the near future.

"With the international projects that Turkey participates in, the country will shine as a symbol of stability in the region and will continue to make such projects lighten the political burden," he said.

Turkey is currently involved in several pipeline projects, such as the Trans Anatolian Pipeline Project (TANAP) which will carry Azerbaijani natural gas to Europe by the end of 2018.