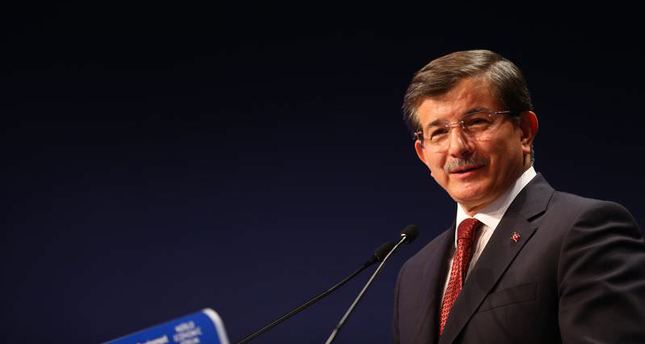 by AA Sep 30, 2014 12:00 am
The rise of the Islamic State of Iraq and al-Sham (ISIS) was caused by the world's failure to support democracy in the Middle East, Turkish Prime Minister Ahmet Davutoğlu has said.

Speaking at the World Economic Forum in Istanbul on Monday, Davutoğlu said, "ISIS now exists because we did not properly support the democratic transition processes in 2012, not because ISIS is so strong or the Syrian and Iraqi people are aligned to ISIS-like radical acts."

Referring to the 2011 Arab Spring, Davutoğlu said democracy guaranteed sustainable stability in a country, linked to the ability of the government to integrate with its people.

"We welcomed the Arab Spring when it first began to flourish as we thought the EU and the U.S. would support and finance the Middle East just as they did for the wind of democracy in the Balkans," he said.

Tunisia's uprising, which resulted in the ousting of dictator Zine el-Abidine Ben Ali, triggered a series of similar uprisings across the region. These uprisings ultimately led to the overthrow of longstanding strongmen in Egypt, Libya and Yemen, and to a civil war in Syria.

Davutoğlu said countries like Poland and Romania now enjoy democracy due to finance from the EU. However, he added, "No state came up to finance democracy in the Middle East."

He claimed the reason Syria faces a terrorist threat instead of democracy is because the world abandoned Syria.

Davutoğlu also condemned attempts to link ISIS to Islam. "Islamic communities that have a deep-rooted culture of politics have the capacity, like any other nation and religion, to both keep democracy alive and improve it. Neither Islam nor the world of Islam can be correlated with entities like ISIS," he said.

Turkey is facing a massive influx of refugees from Syria, with more than 1.5 million now having fled the civil war for Syria's northern neighbor. The latest attacks by ISIS around the Kurdish town of Kobani on the Turkish-Syrian border have seen more than 160,000 refugees cross into Turkey since Sept. 19.