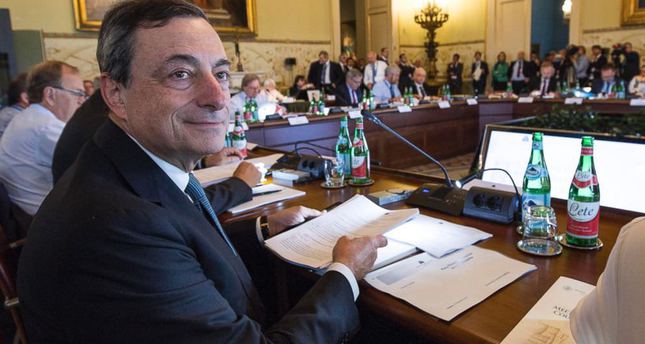 by Oct 03, 2014 12:00 am
The European Central Bank held interest rates at historic lows Thursday at a meeting that was the subject of street protests. President Mario Draghi was expected later to spell out the details of the latest scheme devised by the Frankfurt-based bank to flood the eurozone with liquidity in the hopes of reviving moribund economic growth. In September, the bank lowered its key refinancing rate to 0.05 percent and said it would launch a private-sector asset-purchasing program.

The plan includes an asset-backed securities scheme, which would package loans to be resold on financial markets, and a covered bonds program, which are debt securities backed by cash flows from mortgages or public sector loans.

The scheme would take potentially risky loan products off bank books, thereby encouraging bank lending to companies and households. A bolder anti-crisis measure would be buying government bonds, known as quantitative easing. Draghi has yet to announce the timing and funding for the asset-backed securities scheme. It has been criticized by Germany, the eurozone's biggest economy and most influential member, who is even more firmly opposed to quantitative easing. Draghi was also likely to be quizzed on recent announcements by France and Italy that they would soften the pace of their budget-balancing efforts, a move unlikely to go down well with Berlin and potentially in breach of eurozone rules.

Europe's central bankers were meeting in a crisis hotspot. They were welcomed to the southern Italian city of Naples by a mostly peaceful protest of about 4,000 leftists, students and jobless people who shouted anti-austerity slogans.

Naples is a chaotic, Mafia-ridden metropolis that saw youth unemployment rise above 55 per cent last year. Its mayor, Luigi De Magistris, was suspended Wednesday after a conviction for abuse of office. Unlike the United States and Japan, Europe has not recovered from the 2008 global financial crisis. This week, eurozone data showed inflation edging closer to zero, unemployment stuck near a record high and a key manufacturing sector index dropping to a 14-month low. The drop in the euro-dollar exchange rate to a two-year low of about 1.26 dollars has practically been the only positive development in the run-up to the central bank's meeting. The devaluation helps exports and revives inflationary pressures, lessening the risk of the eurozone facing a period of Japanese-style deflation, but more is needed to lift the currency bloc from stagnation. The governor of the Bank of Italy, Ignazio Visco - a Governing Council member of the European Central Bank who was born in Naples - admitted to the local newspaper Il Mattino that Europe's response to the crisis had been marred by "many mistakes and delays."