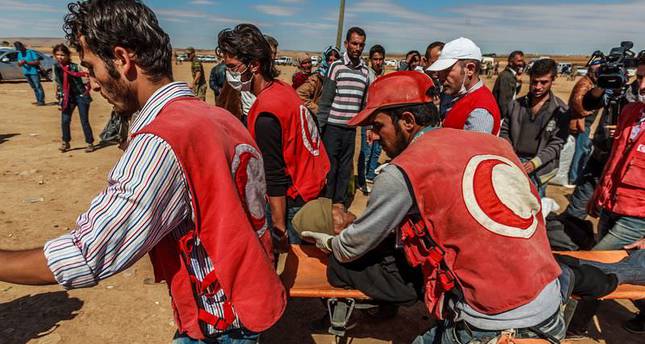 by Daily Sabah with Agencies Oct 12, 2014 12:00 am
The Prime Ministry's Disaster and Emergency Management Directorate (AFAD) announced that Turkey has delivered TL 700 million (roughly $306 million) in humanitarian aid to needy and displaced Syrian people trying to survive beyond the country's borders. Including the beyond border humanitarian aid, AFAD's total operating cost for Syrian people within and beyond Turkey reached $4.5 billion. The total aid amount sent to the country currently stands at $300 million, the statement added. Since the outbreak of the civil war in Syria, Turkey has continued to extend a helping hand to Syrian people left out in the cold and it had received very little amount of support from other countries.

Opening its borders to shelter refugees fleeing the civil war caused by various terrorist organizations, including the alarming Islamic State of Iraq and al-Sham (ISIS), the Turkish government has sent 634 vehicles of humanitarian aid to the Syrian town of Kobani since Sept. 19, as stated by the prime ministry.

With the first day of the ISIS Kobani siege, which was on Sept. 19, Turkey saw the highest refugee influx in the last four years of struggle in the region with Syrian Kurds who were displaced from their homes.

Kobani, also known as Ayn al-Arab, has been the scene of fierce battles between Kurdish groups and ISIS, and the fighting in Kobani has forced some 200,000 of the town's residents and villagers to flee and seek shelter across the frontier in Turkey.

According to governmental officials, no civilians, only militants are left in Kobani.

"The total amount of aid, including food, medicine, tents, clothing and cleaning supplies delivered to the Kobani region, is around $10 million," the office said in a statement.

AFAD has been collaborating with Turkish municipalities, nongovernmental organizations and foreign aid agencies to provide humanitarian assistance to Syria since 2012.