US expressions on economic partnership with Turkey not convincing 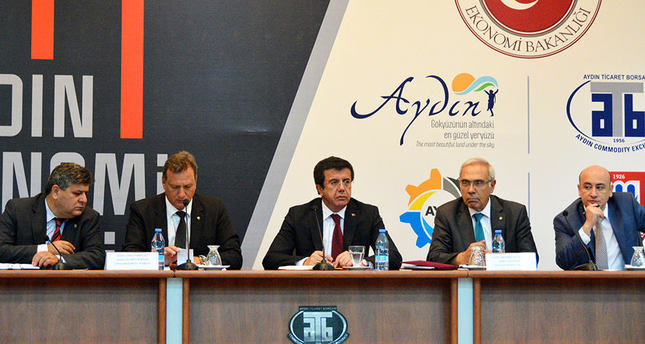 by Daily Sabah with Agencies Oct 12, 2014 12:00 am
Economy Minister Nihat Zeybekci said that Turkey has never established a commercial partnership with the U.S. and added that any strategic partnership that is not based on an economic partnership is not convincing from now on.

Nihat Zeybekci stated that no sovereign country should sign such agreements, but since they were signed in 1995 and entered into force in 1996 such agreements are still in force. "However, recently the U.S. and 28 European countries signed the Trans-Atlantic Trade and Investment Partnership (TTIP) agreement and in 2017, when such agreements come into force, if Turkey cannot obtain the same rights the other parties will obtain from the European Union as a result of the TTIP, then it may become impossible to continue this Customs Union Agreement. We are currently working on this and have legally documented our efforts. Therefore, the Customs Union Agreement should be renewed and Turkey should be involved in the decision-making mechanism," said Zeybekci.

Noting that Turkey is pressuring the U.S. to gain involvement in the TTIP, Zeybekci stated that as a part of the targets of the new Turkey, the government will have to take some precautions if Turkey is not involved in the agreement. "Now the Ministry of Trade is currently working on this. Turkey and the U.S. have been very close allies until today; whether strategically or in military terms. We are included in NATO. We have been many things but never a trade partner. No economic partnership has been established. This is not 'old Turkey' with a foreign trade volume of $5 billion [TL 11.47 billion]. This is Turkey with a foreign trade volume of $500 billion. Our priorities are different," said Zeybekci and added that the response to any type of anti-damping or other trade or commercial restrictions will be harsh.

Mentioning that Turkey's negotiations with different countries are continuing at a greater pace according to the targets set for 2023, Zeybekci added that the export-focused growth strategy will be maintained without any interruption. "We are at the point where we are not even sure which country we are in. In the 10 months that we've been in charge, we have visited more than 30 countries. We are planning on visiting 14 to 15 countries in October," said Zeybekci. He further announced that negotiations with Japan have been initiated to sign a free trade agreement and the agreement signed with Korea has already entered into force. "Our preferential trade agreement with Iran has been signed and approved. Now we have signed another deal with Moldova and our negotiations with Costa Rica are ongoing at the moment," said Zeybekci.