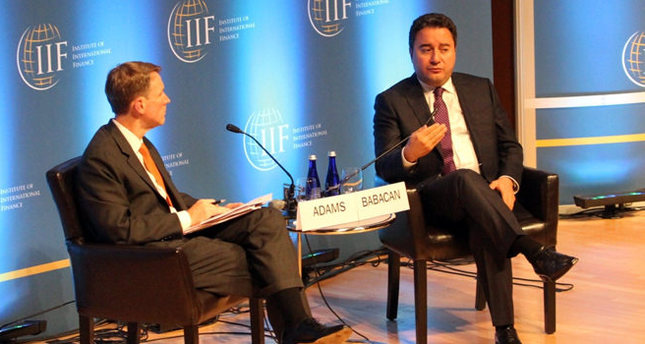 by AA Oct 14, 2014 12:00 am
Deputy Prime Minister Ali Babacan said that 1.2 million job opportunities have been created within the last six years, which indicates that the country's growth is creating employment opportunities.

Babacan, who is currently in the U.S. capital of Washington, D.C., recently attended the annual meetings of the International Money Fund (IMF) and the World Bank while also participating in a private session organized by the Institute of International Finance (IIF) in which the deputy PM answered IIF's Chairman Tim Adams' queries about Turkey.

Babacan said that one of the greatest achievements of the Turkish administration has been increasing gross national product from $230 billion (TL 521.83 billion) to $820 billion within the last 12 years and distributing this income in a balanced manner throughout the country.

Emphasizing that the increase in employment has accelerated over the last five to six years, Babacan also underscored the fact that this economic success has also had side effects such as the current account deficit. He elaborated that, due to Turkey's dependency on foreign countries for energy resources, the increase in the prices of energy has caused Turkey's current account deficit and foreign trade to increase.

Babacan said that the second factor causing the increase in the current account deficit is the decrease in domestic savings rates, adding, "Consumers are optimistic about the future and have no concerns, the same with our Turkish businesses. However, such trust in the future of Turkey's economy is causing people to spend more and save less." Explaining that the government has been successful in trying to increase low savings rates by imposing tight monetary policies, Babacan said that the ratio of the budget deficit to GDP is 1.4 percent, which is lower than the initial target of 1.9 percent. "In 2017, we are aiming to decrease the budget deficit's size relative to GDP to 3 percent; thus, achieving a balanced budget." He also underscored that carefully detailed monetary policies and efficient macro precautions will help increase savings.

Another aim of the government is to offer the biggest share of bank loans to companies and small and medium-sized enterprises (SMEs), which will aim to drive innovation while keeping the already balanced credit growth rate under control. Babacan said that so far, the policies applied have been successful, and announced that 4.6 million individuals have registered for the subsidized private personal pension scheme that was initiated by the government last year. As a result, it has contributed to the increase in general savings.

IIF Chairman Adams praised the Turkish banking system, and asked Babacan whether he is worried about the increase in construction in Turkey. "Not yet, but the construction sector is an area that should be observed closely," Babacan said, and reminded that shopping malls, residences, businesses and various other private sector projects along with many infrastructure investments are included in the construction sector, and infrastructure investments are crucial to growth.

Babacan mentioned that infrastructure investments are not only supported by the budget of the state, but also by various joint ventures between public and private sector companies. For instance, the third Istanbul bridge, the tube tunnel project, the Istanbul-İzmir highway and the Istanbul's third airport - which will be the largest airport in the world - are all being developed by joint ventures between public and private companies, and Babacan said, "We are not spending government money on any of these projects."