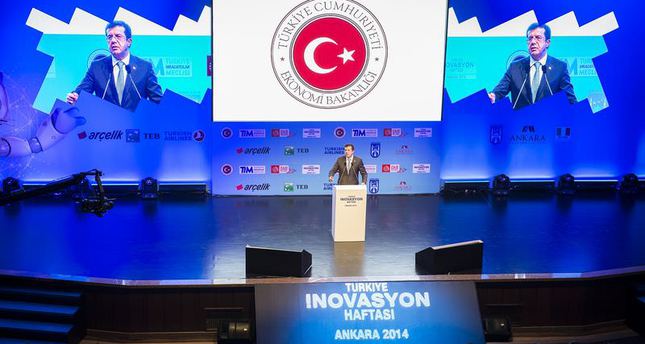 by Daily Sabah with Agencies Oct 22, 2014 12:00 am
The opening ceremony of the Ankara Innovation Week organized by the Turkish Exporters' Assembly took place at the council hall of the National Education Ministry yesterday.

Speaking at the ceremony, Economic Minister Nihat Zeybekci said that the current account deficit, inflation and growth are the main problems in Turkey, adding, "Innovation, research and development, producing information and turning this produced information into production are the gravest problems that Turkey faces," Zeybekci said.

Zeybekci added that the total exports, imports and services income is around $480 billion (TL 1.07 trillion). He further highlighted that Turkey's current exports are around $160 billion, service revenues are around $50 billion and tourism revenues are around $40 billion, and that Turkey has become the sixth biggest economy in terms of the number of tourists visiting a country. "Turkey has accomplished all of this as a subcontractor, meaning, despite the information and production technologies being created by others, raw material and energy resources being controlled by others and consumption habits and consumption networks being under the supervision of others, Turkey accomplished this with its natural and human resources, geopolitical location, aim and entrepreneurship," Zeybekci said.

Economy Minister Nihat Zeybekci also mentioned that as a subcontractor country, it is hard for Turkey to reach the targets it has set for 2023, and underscored the fact that there is a direct connection between the education level of a country and its welfare by giving examples. "The price per kilogram of Turkey's exports was $1.54 in 2012, which rose to $1.60 in 2013 and today is about $1.65, whereas it is $3.50 in [South] Korea. We have to increase this amount no matter what. How can we achieve this? Through research, development and innovation. Turkey must be aware of and fully benefit from its raw materials and energy resources. It should become a country that determines its own consumption habits," Zeybekci concluded.