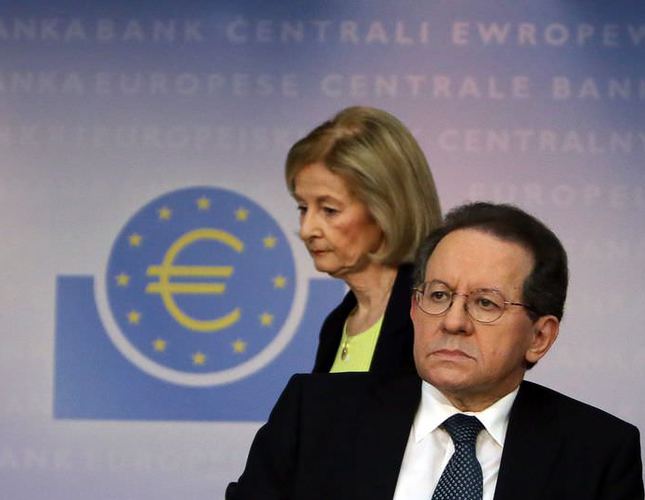 The stress tests carried out by the European Central Bank on 130 of the biggest banks in the eurozone showed that 25 are not prepared for a possible economic crisis with Italy topping the list with nine banks.

Twenty five of the eurozone's 130 biggest banks have failed a landmark health check and ended last year with a collective capital shortfall of 25 billion euros (TL 42.4 billion), the European Central Banks said on Sunday. A dozen of those banks have already addressed the gap by raising 15 billion euros over the course of this year. Italy's financial sector faces the biggest challenge with nine of its banks failing the test, according to watchdog the European Banking Authority, which coordinated the fourth EU stress test with the ECB. Monte dei Paschi had the biggest capital hole to fill at 2.1 billion euros, even after its money raising efforts so far this year. The EBA said three Greek banks, three Cypriots, two from both Belgium and Slovenia, and one each from France, Germany, Austria, Ireland and Portugal had also fallen short as of the end of last year. The ECB has spent the last year reviewing the leading banks' assets and subjecting them to rigorous stress tests - an exercise aimed at flushing out any problems before it begins supervising the sector from Nov. 4. The ECB's pass mark was for banks to have high-quality capital of at least 8 percent of their risk-weighted assets in the most likely economic situation for the next three years, and capital of at least 5.5 percent under a bleaker scenario. Banks with a capital shortfall will have to say within two weeks how they intend to close the gap. They will then be given up to nine months to do so. The EBA required 123 lenders from across the EU to submit themselves to theoretical shocks such as a three-year recession and said 24 flunked in total. The ECB's test included a higher number in the eurozone as it also included subsidiaries of big banks.

The ECB has staked its reputation on delivering an independent assessment of eurozone banks in an attempt to draw a line under years of financial and economic strife in the bloc. But there is no certainty that bank lending will now pick up as the ECB hopes, to breathe life into a moribund eurozone economy. "Thinking that lending somehow can lead GDP is an illusion, and I don't know how that has somehow crept into the policy debate," said Erik Nielsen, global chief economist at Unicredit. Digging down into bank's balance sheets, the ECB said as of the end of last year, banks' book values needed to be adjusted by 48 billion euros and that non-performing loans had increased by 136 billion euros to 879 billion. The ECB will not immediately force those lenders with overvalued assets to take remedial action but they will have to hold more capital eventually, leaving less room to expand, lend or pay dividends. For lending, the more fundamental question is whether the demand for credit is there. "Businesses need to believe in an increase in the demand for their products before asking for credits, and now that external demand growth is no longer there, this is when the eurozone needs demand stimulus," Nielsen said. The ECB is about to take on its new regulatory responsibilities but it may be its monetary policy powers that the eurozone needs most.