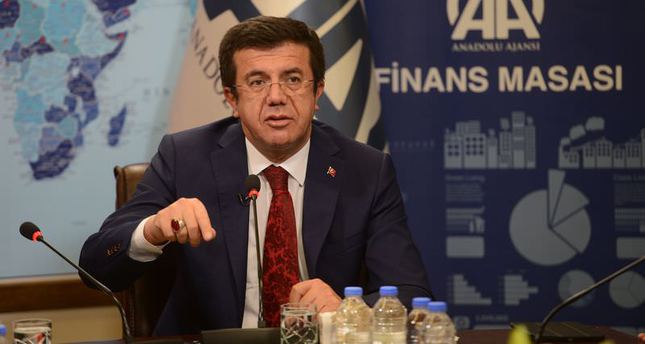 Economy Minister Zeybekci said a cut in interest rates would be the correct response to the U.S. Federal Reserve’s decision to end its quantitative easing program, a policy which increases the money supply

Speaking to Anadolu Agency, Zeybekci responded to questions on economic issues in Turkey as well queries regarding the latest developments in the world economy.. Turkey's government officials have repeatedly criticized the central bank for maintaining high interest rates, calling the policy a limiting factor on economic growth. The Turkish central bank is concerned that any interest rate hikes in the U.S. might lead to capital outflow from Turkey. "But we will see the opposite of this instead. Both the EU and the Turkish central bank do not need to be shy about cutting interest rates." Zeybekci noted that Turkey's foreign trade and foreign direct investment largely depend on the European Union. Nearly 70 percent of international direct investment comes to Turkey from EU countries and nearly half of Turkey's foreign trade is with the EU. The Fed has spent over $3 trillion in the largest financial stimulus program since 2008, known as quantitative easing. The central bank buys up bonds in an effort to inject liquidity into the economy. The Fed announced Wednesday it would end the quantitative easing program.

Zeybekci noted that the European Central Bank president had said: "We will not allow the euro to gain in value."

In response to this development Zeybekci stated, "As the U.S. moves toward a tighter monetary policy, the ECB announced that it can employ quantitative easing and it is doing so at the moment."

Zeybekci further explained, "At the same time, the ECB has cut interest rates three times so far. Contrary monetary movements between the U.S. and the EU are expected. Turkey will be affected by the Fed's decision, but the influence of the European Union on Turkey will neutralize the Fed's influence on the country, so Turkey will be affected positively." Zeybekci warned that "international credit agencies do not comment on Turkey's economic and financial performance; they comment on our political stability and have political motives in their assessments. I do not regard them as credit agencies."

Zeybekci also said the decline in natural gas prices, in line with falling oil prices, could reduce Turkey's energy import bill by around $15 billion and would double the growth of the Turkish economy. "With the fall in oil prices, Turkey may grow economically and increase employment in the country. In Turkey we are seeing an economic recovery as our current account deficit decreased by 35 percent," he said. Turkey's current account deficit decreased by $16.5 billion to $26.7 billion during this year's January-July period, according to the CBRT.